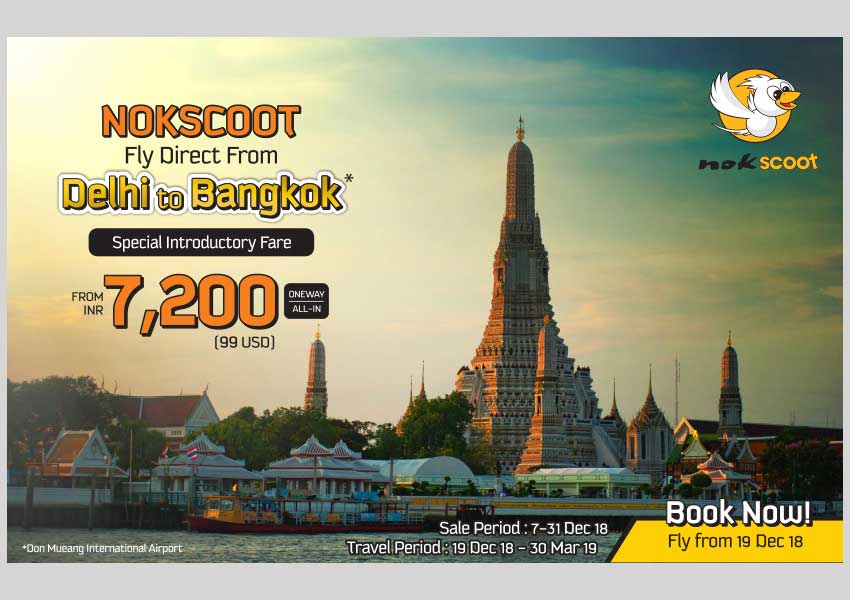 NokScoot, a joint venture LCC between Scoot, 100% owned by Singapore Airlines, and Thailand’s Nok Air, also announced a special promotional one-way Economy class fare starting from INR 7,200 (USD 99), inclusive of taxes and surcharges.  The special promotional fares are available from 07 – 31 December 2018 for travel between 19 December 2018 to 30 March 2019.  The new services will be operated with Boeing 777-200 wide-bodied, twin-aisle jets. Configured with a total of 415 seats, the Boeing 777 offers an unprecedented LCC level of comfort to its valued customers with 24 seats in ScootBiz Class and 391 seats in Economy.

While there are already a few airlines operating on the Delhi-Bangkok route, NokScoot projects that the growing demand for leisure and business travel between the two cities, can support the big capacity it is injecting onto the route.  Passengers travelling between these two great cities will soon be able to experience the deferential hassle-free service and on-time performance of NokScoot.

Mr. Giam Ming TOH, Deputy CEO of NokScoot, said, “We are very proud to announce NokScoot’s inaugural service from Delhi to Bangkok on 19th December 2018.  This route marks our first ever service to South Asia and follows the launch of services to Tokyo Narita in June 2018 and Osaka Kansai in October 2018.

Mr Toh added that “NokScoot believes these flights will appeal to both leisure and business travellers travelling between Delhi, the fourth most populous urban area in the world, and Bangkok. Delhi, as the biggest air hub in India, is also very convenient for those making connections to and from most domestic destinations around India.

“Following the launch of the Delhi service, NokScoot plans to further spread its wings in India with another destination in the first half of 2019″ he added.

From its Bangkok Don Mueang International Airport base, NokScoot operates regular flights to Nanjing, Qingdao, Shenyang, Tianjin and Xi’an in China, Taipei in Taiwan, as well as Tokyo and Osaka in Japan.