Amrapali Jewels’ Mr. Rajiv Arora invited by the Queen of England to a special reception at Buckingham Palace 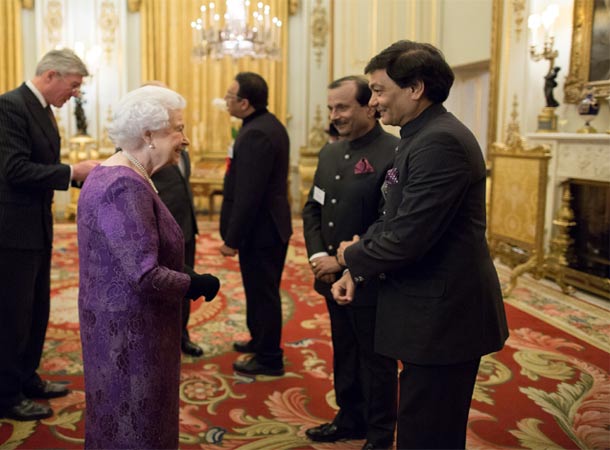 After establishing a jewellery empire that is today considered India’s crowning glory across international shores, Rajiv Arora and Rajesh Ajmera, founders of Indian jewellery House Amrapali, were guests of the Queen at a reception held on Monday 27th February, 2017, at Buckingham Palace to mark the start of the UK-India Year of Culture.

Honored to be recognized by the Queen, Amrapali was the only jewellery house from India to be present at the event, reiterating the brand’s forte of recreating the great India design story. On meeting the founders, The Queen fondly remembered her Jaipur visit in 1961, while The Duchess of Cambridge, Kate Middleton reminisced about wearing Amrapali earrings on her maiden visit to India last year. Her Majesty and The Duchess were also very excited on hearing the news of the forthcoming Amrapali Museum in Jaipur that celebrates the jewellery and object d’art that the founders have collected on their travels since founding the House in 1978.

“The Amrapali Museum will showcase a variety of pieces influenced by British Gold and silver smithing, but that has been made in India. These pieces would be Amrapali’s contribution to India culture year in U.K. and would be a great source of research and study for British museums, designers besides students of arts and culture”, said Rajiv Arora.

Celebrating the longstanding ties between the two nations, the reception brought together those who are custodians of Indian culture, from film to sport, business to art. The cultural exchange between the UK and India has resulted in a beautiful creative dialogue and a constantly evolving source of inspiration. This melting pot of aesthetics is present more than ever in jewellery, Amrapali remaining true to their DNA with traditional techniques coupled with an East meets West approach to design.

On the occasion, Mr. Arora said, “It’s been an honour and privilege to have been chosen by, Her Majesty, The Queen, to represent our nation at this special reception. For years, Amrapali has had close ties with the UK and I consider it my second home. This is a wonderful way to enrich the relationship between both our nations further and strengthen our cultural bond.“