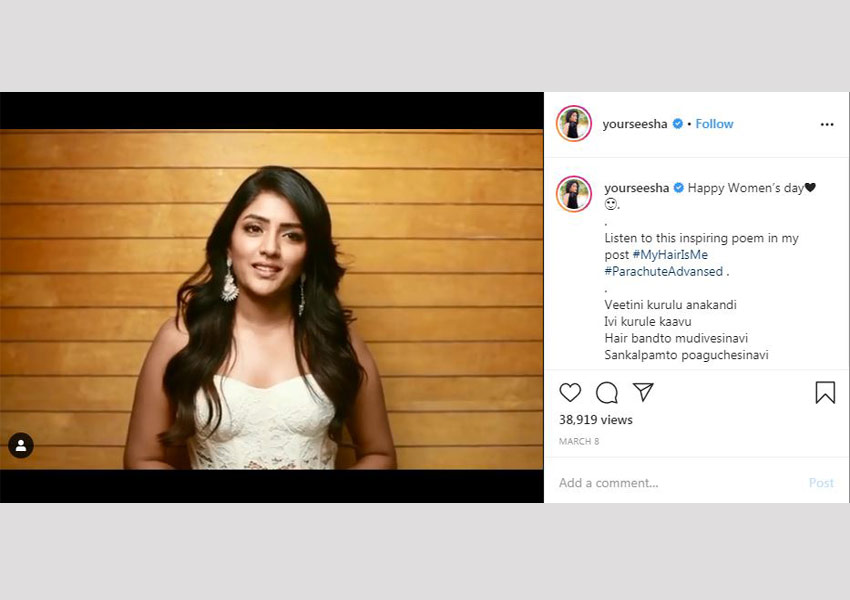 Hair is not just the best beauty ally for women, but is also central to her identity and expression. An exemplification of her moods and feelings, hair is an intimate characteristic of a woman that lends volumes to her persona. This is especially true in the case of Indian women, where hair has always been an integral accessory to one’s overall appearance. No matter the length of hair or how one chooses to style it, a woman’s hair plays an important role in their lives and impacts how they feel about themselves. Recognizing this, Parachute Advansed has introduced an emotive campaign that brings to life this unique personification, which is core to a woman’s identity. In association with Parachute Advansed, renowned female celebrities including Indian film actress Esha Rebba, took to social media, expressing how their hair has helped shape them into the beautiful, confident women they are today. On Women’s Day, Esha Rebba put up a video post on Instagram saying, “My hair expresses who I am perfectly. I believe that my hair is a reflection of who I am as a person and helps express my different moods!”

The campaign by Parachute Advansed builds on modern beauty imagery while using real-life instances where hair is fundamental to the expression of a woman’s emotions and frame of mind. It aims to emphasize on the importance of strong, beautiful hair in the life of women of this country. The ad film artistically showcases how for some women; their hair is a symbol of a firm resolution, or for wings to soar high but for most, these aren’t just hair, they are threads of love. Parachute Advansed, a brand that has been an ally of women since its inception, truly understands the essence of hair in their lives and urges them to use nothing but the best to nourish it.

Link to the Ad film in Hindi.

Link to the Ad film in Telugu.