COLORS’ Vidya- A journey of an uneducated ‘Englisss’ teacher 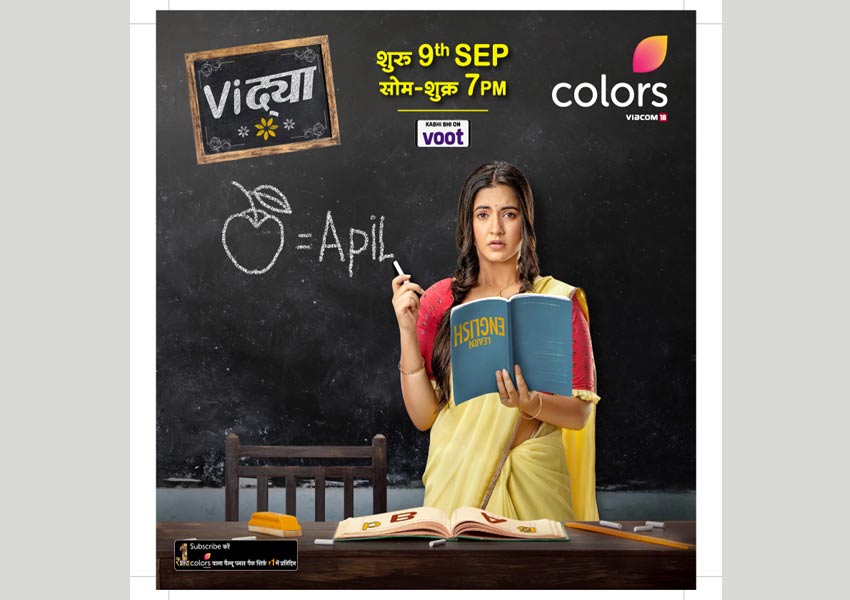 COLORS brings its new social drama offering Vidya will take viewers back to school. And viewers will also laugh throughout the way with Vidya’s linguistic quirks and innocence. The show being produced by Mahesh Pandey, will air from 9th September every Monday to Friday at 7:00 PM on COLORS.

Set against Devgarh, a small village in Uttar Pradesh, the show brings to fore Vidya’s apprehensions and struggles as she steps into the role of a school teacher to financially support her family after her husband’s demise. In the process, she has an encounter with the Pradhan of the village (played by Waqar Sheikh) who poses as a big hindrance in her outing. As she goes along in her journey, Vidya discovers many loopholes in her school and the overarching education system. There is only one person, district magistrate Vivek Vardhan Singh (played by Namish Taneja), who recognizes Vidya’s efforts and acts as her support. Ultimately, she not only ends up winning over her personal struggles but also pins down the people plaguing the education system. As life throws curveballs at her, Vidya keeps overcoming them with her spirit and wit while entertaining the audience along the way.

Speaking about the launch,Nina Jaipuria, Head, Hindi Mass Entertainment and Kids TV network Viacom18, said,“COLORS has been a pioneer in presenting strong and socially relevant concepts that have changed the entertainment landscape of our country. Along with unique storylines, we have successfully created characters which have left an everlasting mark on the minds of the Indian audience. With Vidya, our attempt is to give viewers, yet another relatable character, who will entertain them with her interesting nuances and idiosyncrasies. Vidya’s journey from being an innocent uneducated widow to a resilient woman will add the right amount of freshness and fun to our existing fiction lineup.”

Speaking about the show, Manisha Sharma, Chief Content Officer, Hindi Mass Entertainment, Viacom18, said, “We live in a society wherein people are quick to pass judgments about each other basis their language skills. But there are very few who try to correct them or motivate them to learn better. Vidya is a quirky take on many such moments that we experience in our life through the perspective of an illiterate teacher with the same name. She faces criticism and disparagement, but she tides over them and turns her weakness into her strength to become an English teacher.”

Producer Mahesh Pandey, said,“I hail from a small town in UP and have witnessed how education is still a major concern in these villages. A lot has been spoken of when it comes to our education system, but it’s us who have failed to address these challenges and help spread awareness about illiteracy. Therefore, to bring to light a topic of great importance, Vidya was conceptualized. A strong lady, conscious about her challenges but has the determination to overcome them, she will not only self-educate herself but will also fight the people who are corrupting the system and at the same time, change it.”

Meera Deosthale essaying the character of Vidya Singh commented, “As an actor, I always dreamt of essaying a character that is impactful and creates a stir. And I am fortunate to have received an opportunity to play such a powerful character for the second time in a row.  When I heard the narration of Vidya, it ticked all the right boxes and hence I decided to take it up. The show chronicles the life of an under-confident and uneducated girl and her struggles of becoming an English teacher through a slice of life concept and I am looking forward to it.”

Namish Taneja playing the character of Vivek Vardhan Singh said,“I am portraying the character of a district magistrate, Vivek who enters in Vidya’s life at a very critical point. He will be someone who sees immense potential in Vidya and helps her find her life’s purpose. Vivek will be the positive force in her life, a thorough gentleman who understands the importance of education. My character is simple yet persuasive and I feel honored that COLORS chose me for this character. I am hoping for a good response from the audience.”

Vaquar Shaikh playing Nanku Thakur commented, “I’ve been a part of many TV shows in the past, but Vidya is one of the most unique one. I portray an influential negative character, Nanku Singh who misuses the power of being the pradhaan of the school. His conflict with Vidya results in reflecting role of education in curbing social evil. I am thankful to COLORS for honoring me with this character.”

Along with Meera Deosthale, Namish Taneja and Waqar Sheikh in the lead role the show will feature Liliput playing pivotal roles.