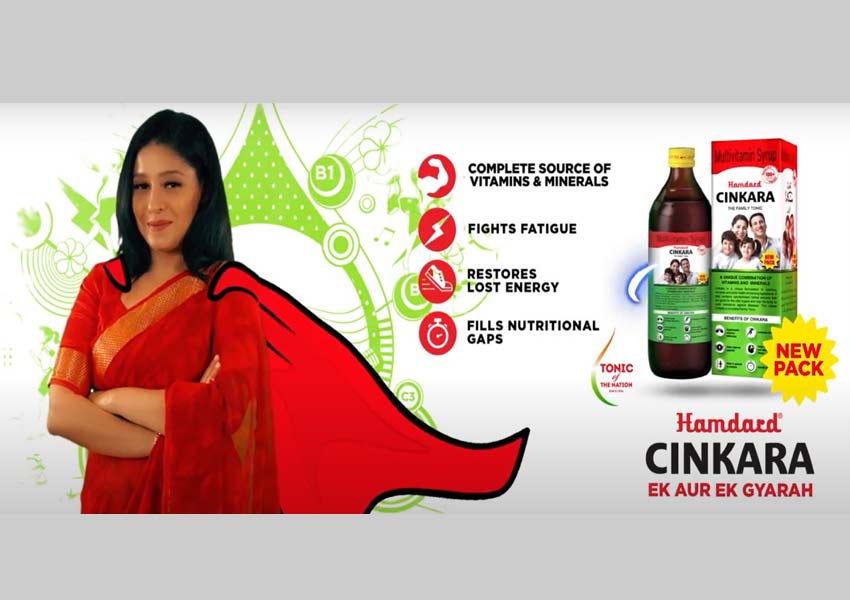 Hamdard Laboratories (Medicine Division), a progressive, research-based health and wellness organization, has rolled out a new marketing campaign #Breathless for its iconic tonic brand Cinkara. With the new brand positioning, the company has brought Cinkara in new packaging and a refreshed look to resonate with its consumers. Renowned Bollywood singer Sunidhi Chauhan is the face of the new brand campaign who has rendered her voice to #Breathless.

The campaign is aimed to connect with mothers and homemakers who are commissionaire of the family’s health and wellbeing. Cinkara is an iconic health tonic with the goodness of multi-vitamins that fulfill the nutritional requirement for individuals who are always on the go and juggle multiple roles every day. The brand adopts an integrated 360-degree approach leveraging print, television, radio, and social media platforms to amplify campaign’s reach and spread the message of a balanced and healthier life for self and family. Furthermore, Hamdard Laboratories has collaborated with Radio Mirchi to maximize the campaign’s reach and engage listeners through ‘The Breathless Challenge’. Additionally, Hamdard has also initiated video advocacy campaign and blogs with Mothers platform.

“My late grandfather had a vision for the brand and its role. The Cinkara packaging is inspired by our tricolor, hoping that one day it would become the tonic of the nation. For more than 40 years now, Cinkara has been one of the most popular and affordable health tonics in the country. At Hamdard, it’s our constant endeavor to provide products that are targeted at holistic wellness and keep us energetic to fight life challenges”, said Mr. Abdul Majeed, Chairman, Hamdard Laboratories (Medicine Division).

Commenting on the campaign launch, Ms. Suman Varma, Chief Marketing Officer, Hamdard Laboratories (Medicine Division) said, “Cinkara is an iconic brand and with this repositioning, we want to reach out to the maximum number of households. We believe that our mothers hold the key to our health and happiness and are an important part of the chain. We are pleased to have Sunidhi Chauhan as our brand ambassador for the campaign as she resonates well with our consumers who are excelling at both professional and personal levels. The Cinkara song is an ode to all the mothers and homemakers who do everything to keep us going.”

Pranav Harihar Sharma, Creative Consultant, Hamdard Laboratories (Medicine Division) said, “We often hear people say that – ‘Saans lene ka bhi waqt nahi milta!’ This summarizes the tussle of an Indian middle class family who is living a breathless life and juggles between multiple roles and responsibilities.  With Cinkara’s new campaign, we have tried to give this reality of ‘breathless life’ an entertaining twist by narrating the role of Cinkara through a mother’s lens and dedicate the breathless song to all the super moms and their families. The campaign is live on various digital platforms, print and radio.”

Cinkara restores lost energy, increases appetite, improves debility and conditions of fatigue and is effective in convalescence. Cinkara is a well-known tonic with vitamins, minerals and herbal extracts. It contains six essential Vitamins along with four minerals and nine effective herbs to keep the body strong, healthy and agile. Cinkara tonic is available on various e-commerce platforms like Amazon and Healthmug.