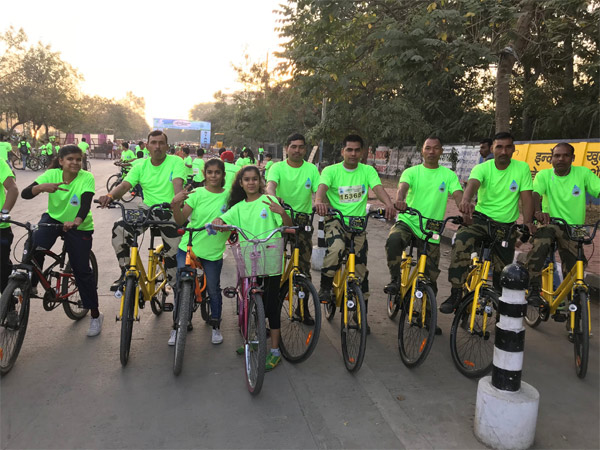 In a bid to promote greener and healthier modes of transportation, ofo, the world’s first and largest dock less bicycle-sharing platform operated via mobile app, came together with Saksham Cyclothon, Indore, to help them enter the Guinness Book of World Records for the ‘largest number of bicyclists riding in a city together’.

Organised by the Indore Cycling Association (ICA), India’s premier cycling event turned out to be a roaring success with participation from nearly 30,000 riders. Witnessed by more than 50,000 people on the ground, the event was attended by the Union Petroleum Minister, Dr. Dharmendra Pradhan. With the common goal to improve the overall quality of lives in India by promoting a greener and healthier Indore through the conservation of fuel, the event gathered massive support from citizens and authorities alike.

As one of the official partners of the Saksham Cyclothon, ofo provided over 400 bicycles exclusively for the police officials and the Border Security Force (BSF) personnel to help them maintain decorum and security throughout the route. As a part of the event, the BSF jawans exclusively rode ofo bicycles through the 13-km track. Sustaining the mass biking activity and pushing the cyclists towards their collective goal, ofo aided participants with refreshments and assistance by setting up regular ‘pit stops’ along the winding stretch from Vijay Nagar to Dussehra Maidan.

Flagging off the event, Shri Dharmendra Pradhan, Hon’ble Minister of Petroleum & Natural Gas, Government of India, asked all present to take an oath with him to conserve fuel and protect the environment. “As responsible citizens, we will all raise awareness about conservation of fossil fuels to ensure a better environment for future generations and to create a new and healthy India,” he said.

“This is a proud moment for Indore. The city is at the forefront of what is fast becoming a nation-wide movement for change. ofo has initiated pilot projects in some gated communities here, we look forward to continued support from the city and its amazing bicycling population”, added Ashish Gautam, City Head, Indore, ofo.

Congratulating Indore on the success of the event and the scale of the achievement, Rajarshi Sahai, Director of Public Policy & Communications, ofo said: “We are excited to support Saksham Cyclothon towards improving the environment and quality of life in Indian cities with our ‘easy-to-use’ bicycle-sharing experience. The massive turnout of participants in Indore is testimony to how cycling culture is receiving acceptance in India and can be an antidote to traffic congestion, air pollution, and related health problems.”

While the President of Indore Cycling Association, Shri Kailash Vijayvargiya praised ofo for making a meaningful contribution to the Saksham Cyclothon, the body’s Secretary, Shri Shibu Varghese, said, “The overwhelming turnout at today’s event not only shows the enthusiasm that people of this city have for cycling but also how conscious they are about the environment. Our aim, just like ofo, is to encourage more people to take up cycling, which is not only economical but also good for health.”

Saksham Cyclothon is an initiative by Petroleum Conservation Research Association (PCRA), a non-profit organization setup in 1978 under the aegis of Ministry of Petroleum & Natural Gas, Government of India. It aims to create awareness among the people about the fuel conservation, environment protection and promote use of cycle for short distances, which will not only save fuel but also help in creating greener environment and better health conditions.

Tags:
Previous Article
Stealing the show in innovative costumes
Next Article
Hotstar gives you the Best Ways to #QuitInStyle

Hotstar gives you the Best Ways to #QuitInStyle
MediaInfoline Jan 22