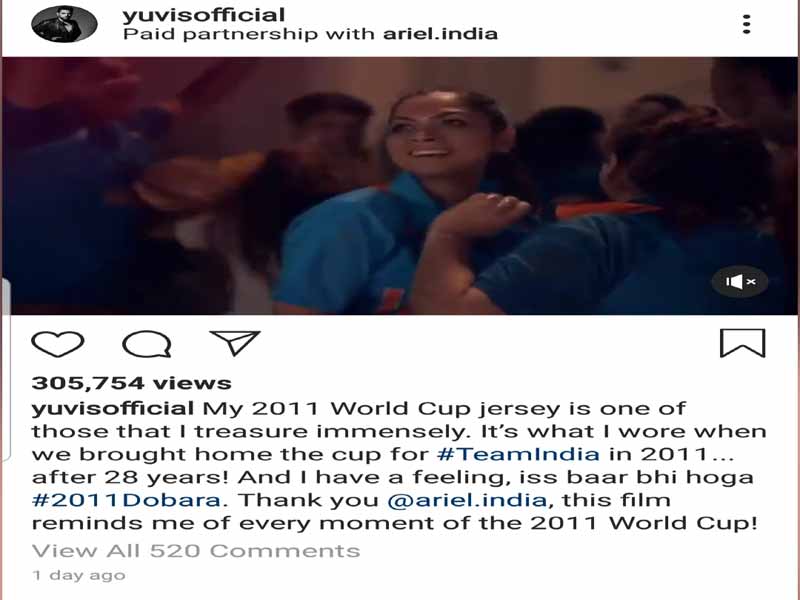 In India, Cricket isn’t just a game, it’s a religion. Not much unites people like cricket. The enthusiasm and excitement only get bigger when it’s time for the World Cup.  Ariel- the premium detergent brand from the house of P&G is out with an extremely emotional, appealing and nostalgic campaign around the upcoming World Cup re-enforcing the faith in Team India that we can repeat the 2011 victory.

Every cricket fan in India cheers for the country, irrespective of gender, religion, social status or location. Each one contributes in their own small way, to take the nation towards its win by cheering, praying, believing and bringing in their bit of luck to the cricket fervour. Over all these years, they hold the match-winning jerseys very close to them, and so is the case with the 2011 world cup jersey, wearing which they witnessed the World Cup coming home after 28 years! The campaign captures the moments of India’s victory in 2011 and states that its time for everyone to keep their lucky jerseys ready and wear it again while cheering for India and hope that its magic will rub off this year too.

Ariel’s #2011Dobara takes viewers down memory lane when India won the World cup in 2011. It makes them relive the anxiety, hope, fear, cheer, joy, pride and celebration that all Indians experienced during the final match that was played on 2nd April 2011, after which Team India lifted the Cricket World Cup after 28 years. The ad film touches the sentiment that we as Indians are superstitious by nature and consider things/tokens/people to be lucky for the team/match. Ariel’s new campaign hopes to repeat the magic of 2011 win and at the centre of all this is the lucky jersey that people hold so close to them. This lucky jersey needs to rework its charm but before that it needs to be washed with Ariel to remove the stains that followed the win- stains of cake, cold drink, wine, sweat etc. Ariel truly believes that if everyone brings with them a little luck with their lucky jersey, India might just bring back the World Cup. In this journey, Ariel ensures clean and stain free jerseys (ready to cheer) as it gives best stain removal in one wash.

VirenderSehwag shared the video on Twitter and commented, “This 2011 World Cup is etched so fondly in my memory, the day #TeamIndia made our nation proud. After watching this film by @ArielIndia, I can’t wait to feel the same way again. Kyunki is baarhoga #2011dobara.”

Yuvraj Singh commented as he posted the ad film on his Instagram handle, “My 2011 World Cup Jersey is one of those that I treasure immensely. It’s what I wore when I brought home the cup for #TeamIndia in 2011…. after 28 years! And I have a feeling, issbaarbhihoga #2011Dobara. Thank you @ariel.india, this film reminds me of every moment of the 2011 World Cup!

Harbhajan Singh also took to Instagram and shared the #2011Dobara film. He wrote in the post, “This @ariel.india film brings back all the 2011 World Cup memories to life, like when we lifted the trophy we felt like we were on top of the world. We made the entire nation proud. And to this day, I keep my winning jersey close to me. I am all set to wear my lucky jersey and cheer to see #2011Dobara.”

More and more fans are getting inspired to don their Ariel washed lucky jerseys and cheer for Team India ever since Ariel’s #2011dobara film went on air. Fairly so, after all the ad campaign brings the nation together through a common element and that is the lucky jersey wearing which they had witnessed and celebrated India’s win in 2011.

Revive the luck of your jersey with Ariel and cheer #2011Dobara.