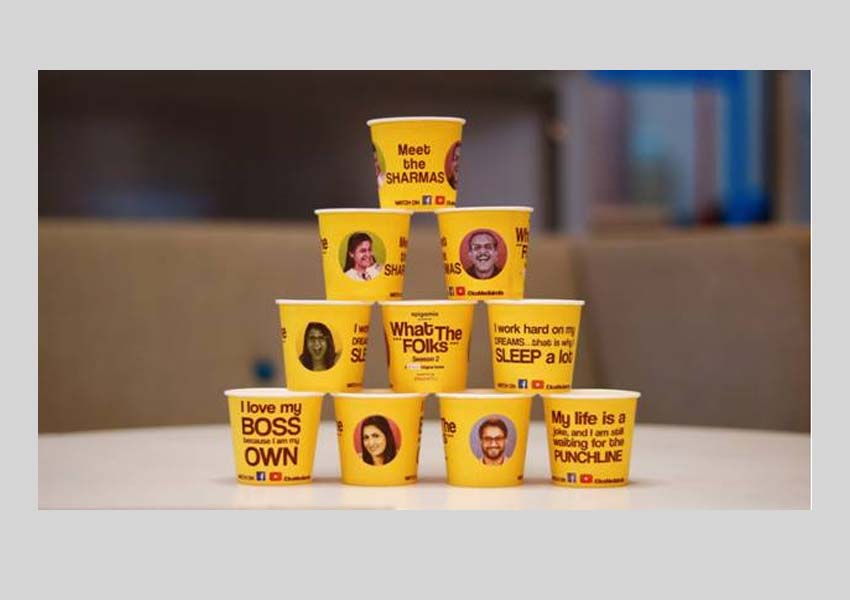 CupShup, the venture known for technique of converting tea and coffee cups into a platform for brands, has launched a campaign promoting Dice Media’s newest web series What The Folks! Season 2. The series is a modern take on how families grow together despite their differences. What The Folks! Season 2 will be a crazier, funnier and a warmer journey of a family dealing with challenges thrown at them. In a bid to promote the series, CupShup will reach out to over 200 corporates across Mumbai, Delhi NCR, and Bengaluru.

Banking on the popularity of the characters in the series and their likeability among the masses, CupShup has embarked on a unique plan of action. Five different creatives have been used in different paper cups, which carry quirky one liners about each character in the series. The campaign will be carried on till 5th November 2018.

Speaking about this, Mr Sanil Jain, Co-Founder, CupShup, said, “What The Folks! is an extremely popular web series and people across all age groups identify with it and the characters therein. Another habit that every Indian identifies with is drinking tea. There thus could not have been a more perfect amalgamation than to promote the series and its characters through paper tea cups. The already famous series will only grow in popularity and resonate across the cities.”

Adding her comments, Aditi Shrivastava, co-founder of Pocket Aces said, “After a successful partnership last year, we were excited to repeat our collaboration with CupShup this year. Corporates are the perfect target audience for What The Folks!. The idea is to grab their attention while they’re sipping on their day’s cuppa and to remind them that some great content to indulge in is just a click away. Our online reach is about 50 million per week and offline partners such as CupShup help us make our engagement with audiences that much more personal.” Shrivastava adds, “It also helps extend visibility for our partner brands Epigamia and Pepperfry to this audience. So it’s a win-win-win, the way we see it”.

The paper cups are a cue which triggers people to start talking about something; discussions that may not happen when they see a hoarding. Using this vantage point, CupShup hopes to receive tremendous response from the target audience for the web series. Giving the age-old medium a new lease of life, CupShup has delivered various other advertisements earlier worth half-a-million dollars for many other brands over the past three years.

Once it has dug its feet in colleges and corporate offices, CupShup plans to make use of this access to provide other kinds of marketing services. For starters, CupShup helps its clients place some of their sample products at offices for potential customers to try.