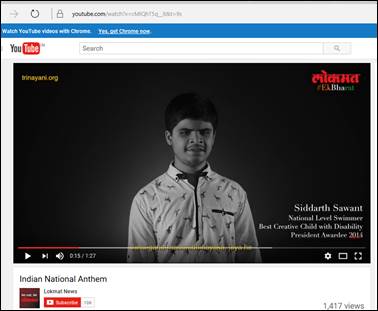 On the occasion of India’s 71st Independence day, Lokmat Maharashtra and Goa’s No. 1 daily along with Trinayani- a not for profit NGO launches a film bringing together persons with and without disabilities thus promoting inclusion. Through this film, Lokmat creates awareness towards citizens who are differently abled applauding them for their achievements.

The core theme of the film  is towards ‘Inclusive India’ involving persons with different disabilities and diversities singing the national anthem together with non-disabled individuals. The film features people who have visual, speech, hearing, intellectual and mobility impairment along with representatives of LGBTQ community and an Acid Attack survivor.

A Lokmat initiative, the film is conceptualised by Ritika Sahni (singer – activist & Founder, Trustee Member – Trinayani NGO) and facilitated by Team Trinayani, is an attempt to show the need for an ‘Inclusive India’ #ekbharat i love it.

Speaking on this initiative Ms. Ritika Sahni, Singer – activist & Founder, Trustee Member – Trinayani NGO said, ”Singer-activist and Consultant in Disability Inclusion I am happy to be part of this effort taken by Lokmat Media towards informing and hopefully enriching the lives of millions of people with this message of Disability Awareness. The film facilitated by my Ngo Trinayani send the message of how each one of us benefits by being inclusive, accepting and tolerant of disabilities and diversities.”

Here is the video link: