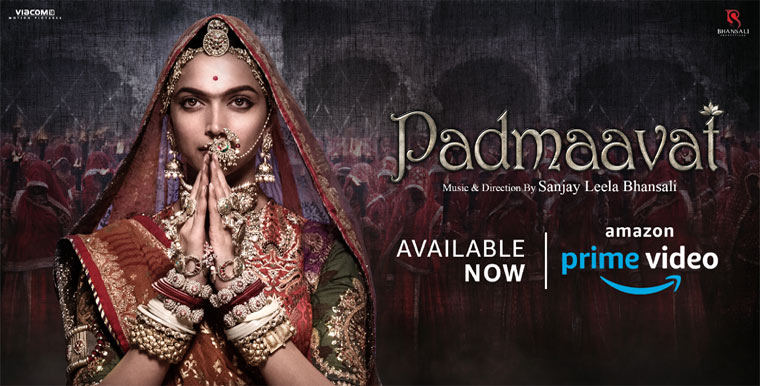 Amazon Prime Video announces one of its biggest movie acquisitions to date, the mega blockbuster, Padmaavat.  Through this deal with Sanjay Leela Bhansali Films and Viacom18 Motion Pictures, Amazon Prime Video will be the digital home for the epic movie, the first and only place for customers to stream the most-awaited romantic period drama of the year. Padmaavat will premiere on Prime Video on March 27, 2018, within weeks of its theatrical release.


Vijay Subramaniam, Director, Content, Amazon Prime Video India, said “Our promise to offer the latest, exclusive and the most awaited content to our customers is truly exemplified with bringing Padmaavat to Prime Video, exclusively for our customers.  Padmaavat has been one of the biggest releases of the year and Sanjay Leela Bhansali’s grand vision came to life through stellar on-screen performances by some of the best talent in Bollywood. We are proud and excited to associate with Sanjay Leela Bhansali and Viacom18 Motion Pictures for the worldwide digital premiere of Padmaavat exclusively on Amazon Prime Video.”

Set in the period of the Delhi Sultanate, the film is a rendition of the story of Alauddin Khilji, the second ruler of the Khilji dynasty, and his obsessive love for the queen of Mewar, Rani Padmini. Directed by Sanjay Leela Bhansali, Padmaavat stars Deepika Padukone, Ranveer Singh and Shahid Kapur in the lead, supported by Sanjay Dutt, Jim Sarbh, Sonu Sood, Aditi Rao Hydari and many such extremely talented actors. The film is produced by Viacom18 Motion Pictures and Sanjay Leela Bhansali Films.