Catch the #FlixFirstScreening of ‘Jumanji: The Next Level’ 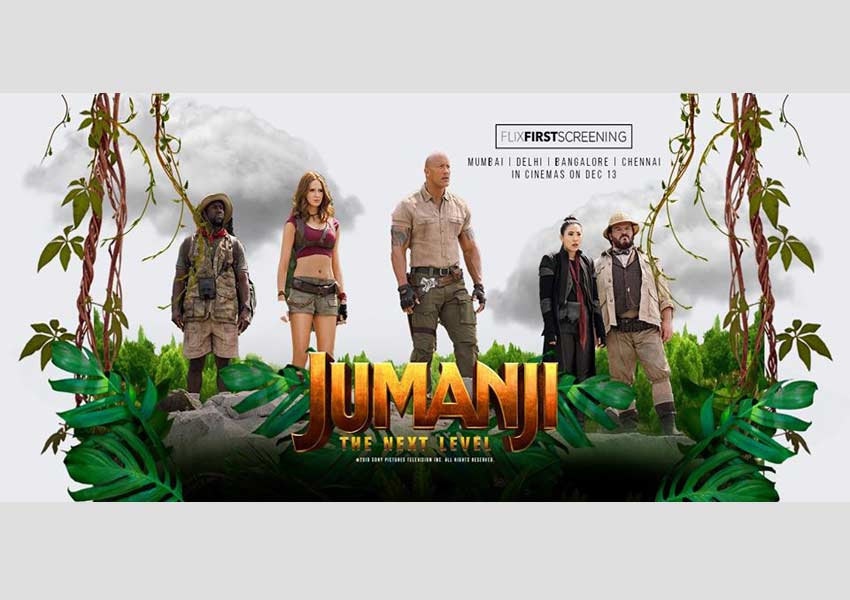 A terrifying jungle, gigantic beasts and a squad on the run! &flix, the destination for the biggest Hollywood hits, is set to bring the next #FlixFirstScreening – catch the adventure-fantasy hit ‘Jumanji: The Next Level’. A chance to #LeapForth into the world of action, adventure and drama, #FlixFirstScreening offers viewers a special preview of the biggest Hollywood blockbusters and this time it’s surely ‘the next level’ of action and entertainment.

After successful Flix First Screenings of blockbuster movies like Once Upon A Time In Hollywood, Spider-Man: Homecoming, Men In Black: International, Spider-Man: Into the Spider-Verse, Venom and Spider-Man: Far from Home, &flix brings the third installment of the popular Jumanji franchise. The channel is all set to host the premiere across Mumbai, Delhi, Bangalore and Chennai.

Catering to the enthusiasm and anticipation around the film, &flix has an exciting opportunity in store. The channel has launched a quirky digital engagement across its social media handles to entice fans.

In Jumanji: The Next Level, the gang is back but the game has changed. As they return to Jumanji to rescue one of their own, they discover that nothing is as they expected. The players will have to brave parts unknown and unexplored, from the arid deserts to the snowy mountains, in order to escape the world’s most dangerous game. Director Jake Kasdan brings together a star-studded ensemble cast comprising Dwayne ‘The Rock’ Johnson, Jack Black, Kevin Hart, Karen Gillan and Nick Jonas among others.

Hop on to the adventure ride and run for your life with the #FlixFirstScreening of Jumanji: The Next Level on December 12, 2019, before anyone else

“Jumanji: The Next Level is really epic!” superstar Dwayne Johnson