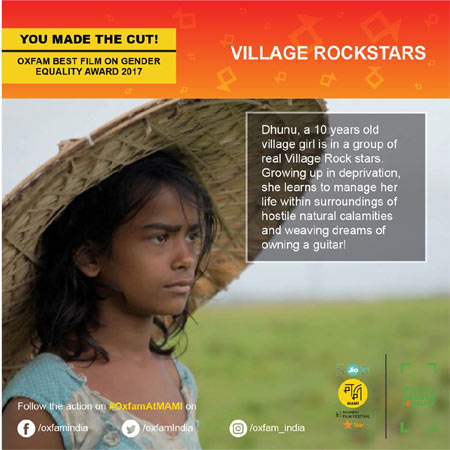 The second edition of the Oxfam Best Film on Gender Equality Award 2017 was kicked off at the star studded Opening Night of the Jio MAMI 19th Mumbai Film Festival with Star 2017. The high profile jury for this year announced the four shortlisted films that include some which have got recognition and accolades at prominent film festivals abroad.

The four shortlisted films are ‘Village Rockstars’ an Assamese film directed by Rima Das about a 10 year old village girl who weaves dreams of owning a guitar while fighting her poverty and natural calamities; ‘The Hungry’ directed by Bornila Chatterjee is a Hindi language film adapted from William Shakespeare’s Titus Andronicus set in contemporary New Delhi. Set in the extravagant surroundings of an Indian wedding while exploring the role of the patriarch and corruption in Indian politics and big business, ‘The Hungry’ stars Naseeruddin Shah, Tisca Chopra, Neeraj Kabi, Arjun Gupta, Sayani, Antonio Aakeel and Suraj Sharma in lead roles.

Next is ‘Granny (Ajji)’, a Hindi language film directed by Devashish Makhija,  which tells the story of a frail grandmother who sets out to seek revenge for the rape of her granddaughter. ‘Checkmate (Turup)’ directed by Ektara Collective is a Hindi language film. Set against the backdrop of the game chess, a domestic worker with a secret hobby, a former journalist struggling with married life and a young woman in love, find themselves pushing boundaries and challenging the rules of the game.

The jury involved for the selection process of the shortlisted films includes some renowned personalities from the Indian film circuit. Alankrita Shrivastava, an award-winning film director and screenwriter with a penchant for telling women’s stories whose film ‘Lipstick Under My Burkha’ won the Oxfam Best Film on Gender Equality Award last year will be seen judging the shortlisted films for this year’s award. Vasan Bala who assisted filmmaker Anurag Kashyap on films like ‘Dev.D’ (2009) and ‘Gangs of Wasseypur’ (2012) and worked with Michael Winterbottom on ‘Trishna’ (2011), is part of the jury. Currently dabbling in advertising, Vasan, who also made the feature film ‘Peddlers’ (which was in Cannes Critics’ Week in 2012), co-wrote ‘Raman Raghav 2.0’& ‘Bombay Velvet’.

The third jury member is Gayatri. After trying her hand at ad filmmaking and a couple of shorts, Gayatri who studied MFA (in filmmaking) at Northwestern University, Chicago on her return, co-wrote and co-directed the critically-acclaimed, ‘Oram Po’ (aka Auto, 2007). Her most recent project is ‘Vikram Vedha’ (2017), a modern take on the Vikram and Betal tales of yore, set in the contemporary world of gangsters and cops. 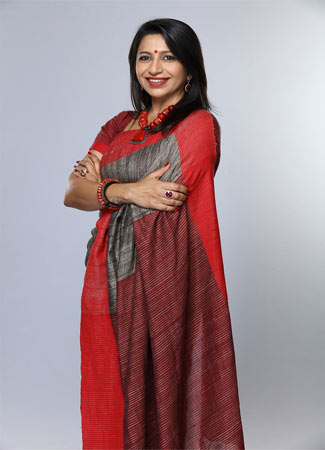