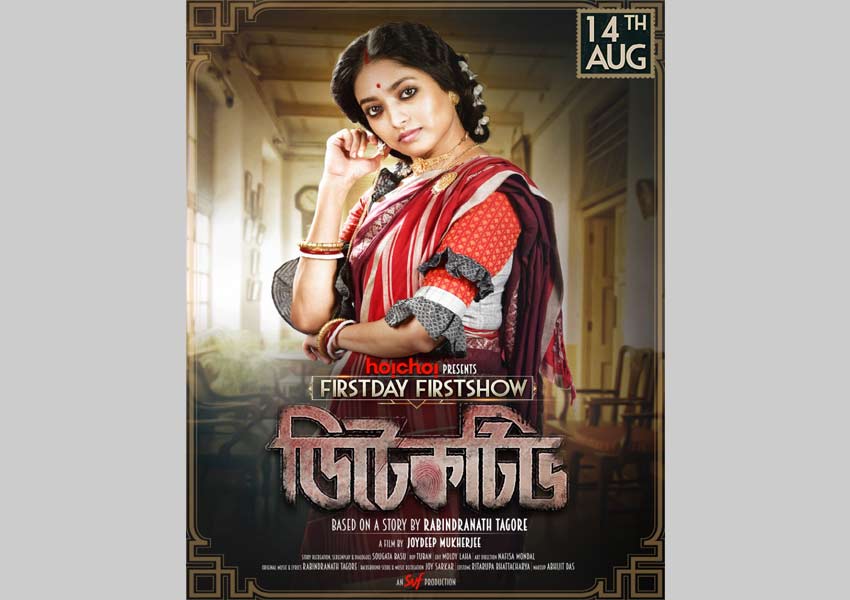 Anirban Bhattacharya starrer “Detective” will be heading for a Direct-to-Digital release on hoichoi. hoichoi announced a new property a day before, “First Day First Show” which will helm the direct releases of Bengali movies. It was originally slated for a theatrical release but owing to the current restrictions mandated by the government for audiences to maintain a decorum of social distancing, and movie theatres abiding the same by keeping the doors of their single screens and multiplexes closed, SVF have consciously decided to take a digital route. It is in fact, also, the first direct OTT release for SVF, their first film to be released in an OTT platform this year. hoichoi announced the grand news by doing a Multiple Poster (5 posters of each lead character) Reveal in the morning followed by the Official Trailer.

Directed by Joydeep Mukherjee, Detective, is based on Rabindranath Tagore’s story and the character of the “Detective” is being essayed by versatile Anirban Bhattacharya, who in the past year has impressed the audience with his choice of roles and their portrayal on screen.

Mahendra Soni, Co-Founder and Director, SVF said, “We are excited that the film is getting a digital release and becomes the first Bengali feature to get a World Premiere on hoichoi. Although, we had planned to have a big theatrical release, the sudden pandemic compelled us to take the digital route. This decision is motivated purely by choice and hoichoi became the go-to OTT platform – as it is known for its variety of content along with being the paramount OTT platform in the Bengali community.”

Vishnu Mohta, Co-Founder of hoichoi added, ”hoichoi has started many revolutionary properties which changed the face of Bengali Cinema starting with the World Digital Premiere of blockbusters and other films. This time, it’s “hoichoi Presents First Day First Show” where we are happy to exclusively premiere one of the most anticipated films of the year starring the famous Anirban Bhattacharya. We are always looking out to embrace good content and Detective, as a film, will bring all our audiences, globally, to step up and celebrate the film along with the celebration of our Independence.”

Slated to release on 14th August only on hoichoi, Detective stars Anirban as Mahimchandra, a police-detective, who aspires to earn fame in his profession. He craves for some complex case to come his way so that he can prove his worth. Mahimchandra’s first love is his detective books (primarily, Sherlock Holmes whom he admires) and second, is his wife Shudhamukhi portrayed by Ishaa Saha. Obsessed with finding a complicated case, Mahimchandra encounters Manmoth essayed by Shaheb Bhattacherjee. He devotes his energies towards unravelling the youth’s secret leading to complications in his own life. Mahimchandra’s “Watson” is Hutashon (Ambarish Bhattacharya), who though idolises his detective sir, gets fed up because of his continuous obsession over trivial matters. Mahim also has a widowed sister, Snehalata (Trina Saha) who thinks her brother is a “good-for-nothing”.