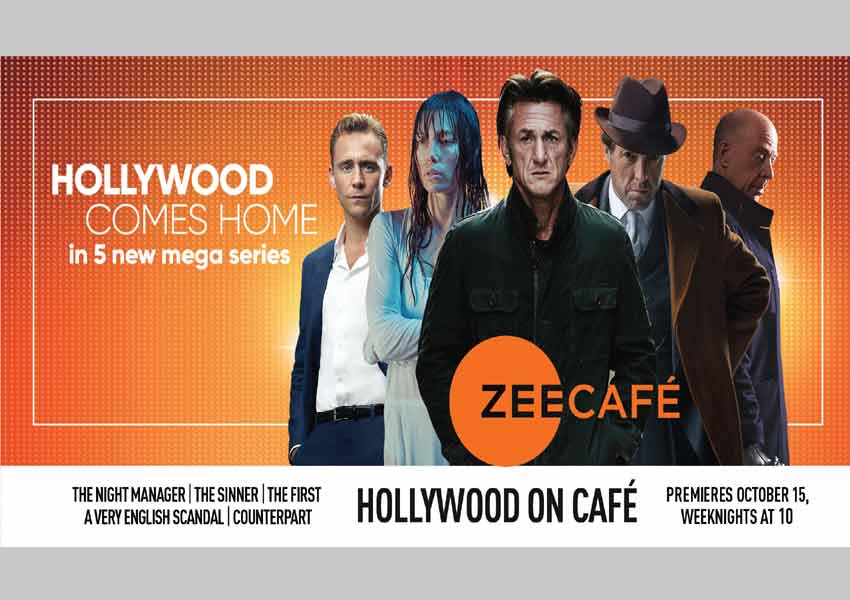 With the second edition of ‘Hollywood On Café’, Zee Café is all set to bring some of the top-rated Hollywood series for the first time to the Indian audiences Monday to Thursday at 10PM. The content block has been specially curated with highly acclaimed shows featuring award winning Hollywood actors, directors, producers and screenwriters. After the phenomenal success of the first season that was launched last year, season 2 of ‘Hollywood on Café’ will feature some of the biggest names in Hollywood – Tom Hiddleston, Hugh Laurie, Jessica Biel, Hugh Grant, J.K.Simmons and Sean Penn.

The block is sure to raise the bar of television viewing with intriguing twists, intricate plotlines and large-scale production series. The experience of Hollywood is set to come alive in your living room with the 5-new mini-series:  The Night Manager, The Sinner, A very English Scandal, Counterpart and The First. With an IMDB rating of 8 and above, these captivating line-up is crafted for the ever-eager audience who is always on the lookout for stimulating and fresh content.

Golden Globe Award winner for best performance in a mini-series, Tom Hiddleston can be seen in a thrilling role of a former British soldier turned spy in this crime based series The Night Manager. With an IMDB rating of 8.2, a pacey action thriller, cinematic television production, and most of all stellar performances by Tom Hiddleston and Hugh Laurie the series has something for everyone.

Starring the very talented Golden Globe award nominee Jessica Biel, The Sinner is a mystery-thriller set in Keller, New York with an IMDB rating of 8. The criminal anthology involving a sharp blend of sinister and spiritual plots, the show will keep you at the edge of your seat.

Based on true events, A very English Scandal stars Golden Globe-nominated actor Hugh Grant who plays Jeremy Thorpe – a very English-styled politician. The political thriller follows the British MP, as he avoids getting exposed with his homosexual affair with his scorned lover. A plot filled with twists and turns as it takes a dig on a society’s secrets and scandals is bound to keep the audience captivated.

The First, starring Oscar winner Sean Penn, is a piece of art that gives a peek into the human cost involved for a scientific and technological advancement. Scoring an 8 on the IMDB rating, the storyline hinges on human emotions; based on Penn’s five chosen astronauts who battle perils and makes personal sacrifices as they race to be the first humans to reach Mars, yet, not reaching the red planet.

Immerse yourself with the captivating performance as the best of Hollywood takes over your television screens with ‘Hollywood on Café’. Tune into Zee Café at 10.00PM Monday-Thursday from October 15, 2018.