Many Indians in India! Your favorite ALTBalaji shows in your language now! 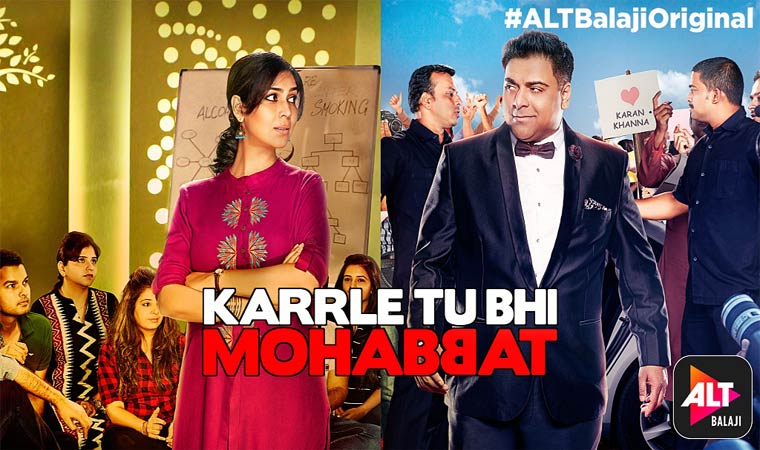 India’s largest online platform for original shows, ALTBalaji, has acquired leadership position within 8 months of launch in April 2017. When competition and ecosystem isn’t looking in producing content in Hindi and other languages, ALTBalaji launched with 7 #ALTBalajiOriginals, today has 12+ original shows available on the platform apart from the regional stand-up comedy and content for kids. And now they have announced that some of their most popular #ALTBalajiOriginals like ‘Karrle Tu Bhi Mohabbat’, ‘Dev DD’, ‘Bewafaa Sii Wafaa’, Romil AND Jugal’ and ‘The Test Case’ are also available in Malayalam, Telugu and Tamil languages for the regional audience.

Speaking, about launching these shows in regional languages, Manav Sethi, CMO, ALTBalaji said, “We have been closely watching consumption patterns on our platform and outside. English is niche and yet most of our competition is not focusing on creating and launching original shows in Hindi & other languages. We realized that consumption from non HSM markets has been growing where people watched these shows with subtitles. We also noticed traffic coming from states and cities where these languages are predominant. Then we started to integrate the “potential” universe from marketing pov to “consumption” universe and that’s when interesting patterns and trends started to emerge. At that point we started to invest in creating these stories in languages apart from Hindi as there is latent willingness to consume and pay for it too! We also noticed that when we launched our Tamil show ‘Maya Thirrai’, the show got traction not just from the South but also from Singapore and Malaysia, where there is a settled Tamil population. Even our Bengali #ALTBalajiOriginal Dhimaner Dinkaal’s trailer garnered traction from Dhaka. In next 4-6 quarters we would launch #ALTBalajiOriginals in more languages.”

Karrle Tu Bhi Mohabbat: With over 7 million views ‘Karrle Tu Bhi Mohabbat’, centers around Karan Khanna (Ram Kapoor) and Dr Tripura (Sakshi Tanwar) who have contrasting personalities and it is their love-hate relationship that makes for an interesting watch. The much appreciated #ALTBalajiOriginal is all set to soon stream the second season of the show. For now, viewers can watch and enjoy the first season in Malayalam, Telugu and Tamil

DEV DD: A modern day take on Devdas, ‘Dev DD’ is one of the most talked about show of ALTBalaji and is now streaming in Malayalam, Tamil and Telugu. With over 10 million views, ‘DEV DD’ is the story of Devika and is based in Rajasthan. Devika is a girl who believes in gender equality and is someone who does not want to live in the bubble of Rajasthan.

The Test Case: Starring Nimrat Kaur, ‘The Test Case’ hit the bull’s eye from the word go. We even had Juhi Chawla as India’s Defense Minister even before, India had a woman Defense Minister! One of the most anticipated shows of ALTBalaji, ‘The Test Case’ is a story of Captain Shikha Sharma (Nimrat Kaur) who is sent to Special Force Training Centre in Kolipad along with other male counterparts on the insistence of a woman Defence Minister Shraddha Pandit (Juhi Chawla) as a test case. A solid case for women empowerment, more episodes of ‘The Test Case’ will soon be streaming on the app and the website in early 2018, for now the viewers can enjoy the first episode of the show in Malayalam, Telugu and Tamil.

Romil AND Jugal: A modern-day Indianised adaptation of Shakespeare’s ‘Romeo and Juliet’, ‘Romil AND Jugal’ has over 2 million views. Directed by Nupur Asthana it is an unusual love story of Romil and Jugal. It grabbed eyeballs just after its launch and became a craze among the youngsters. Viewers can now watch the entire series in Malayalam, Telugu and Tamil.

Bewafaa Sii Wafaa: With over 5 million views, ‘Bewafaa Sii Wafaa’ revolves around Sumer and Meghna who are deeply in love. They are also married, but as fate would have it, to different people. Theirs is a passionate tale of love, lined with a wicked twist of crime.