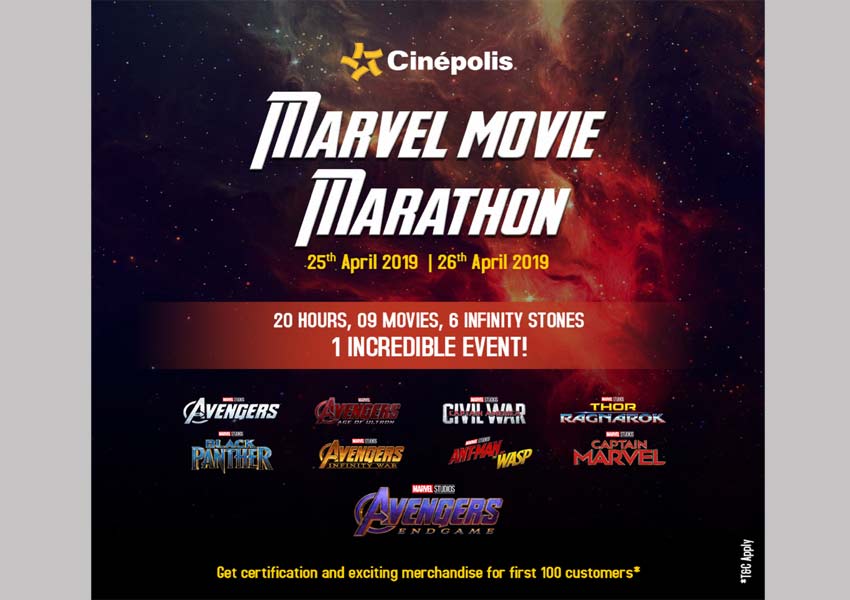 Cinépolis is hosting India’s first movie marathon screening the most popular Marvel films. This initiative comes against the backdrop of the release of the much awaited ‘Avengers Endgame’, recognized as the finale of the Marvel film series that began in 2008 with Iron Man.

In line with Cinépolis’s constant endeavor to pioneer innovative initiatives for its patrons, the 20 hour movie marathon is scheduled to start from 25th April 8:00 AM onwards across 4 cities (Delhi, Bhubaneshwar, Pune and Mumbai). The marathon will screen 9 select movies that are essential to understanding the basic stakes and character arcs and will conclude with the ‘Avengers Endgame’ release. Loyalists who watch the entire string of movies and successfully complete the marathon will be the first ones to watch the ‘Avengers Endgame’. The first 100 fans will also be awarded special Disney merchandise and certificates.

Devang Sampat, Director – Strategic Initiatives, Cinépolis India said “As the entertainment space continues to evolve rapidly, we want to constantly surprise our patrons with refreshing new initiatives. ‘Movie marathons’ are a popular concept outside India and we were excited to introduce this element to the Indian audience. Given the enormous Marvel fanbase in India, we wanted to give them the opportunity to relive the saga of their favorite Marvel movie characters on the big screen.”

Fans can purchase the Marvel movie marathon package for Rs. 1500/- inclusive of movie ticket and food voucher. Book a package now to watch your all-time favorite characters come to life on the large screen again on here

The marathon will be conducted in the following Cinépolis cinemas.

Cinépolis strengthens its foothold in Chandigarh