Naxalites could be the subject of Vishal Bharadwaj’s next film 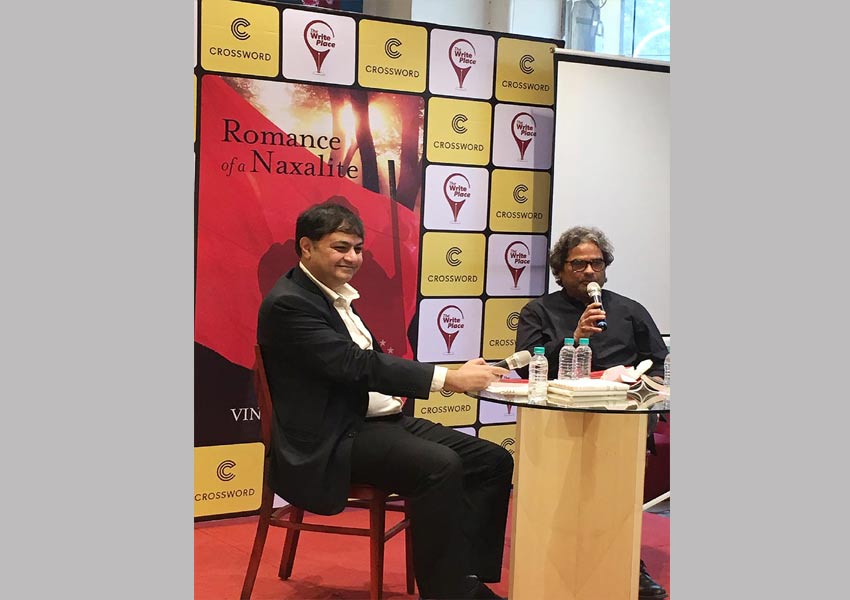 He has adapted Ruskin Bond’s stories for his movies – The Blue Umbrella (2005) and 7 Khoon Maaf (2011).  His famous Vishal trilogy of films based on William Shakespeare’s plays, Maqbool (‘Macbeth’), Omkara (‘Othello’) and Haider (‘Hamlet’) have won plenty of critical acclaim.

Hence, it was interesting to see him discussing the book “ Romance of a Naxalite”, with author Vineet Agarwal, Special Director of Enforcement Directorate.

A very keen and perceptive audience turned up to listen and participate on a languid Sunday morning.
Set against the backdrop of the Naxalite movement, which first came to the forefront in the late 1960s,with the left-wing revolt that took place in West Bengal,  the book  is a tale of innocent love and youthful ambition caught in the cobweb of a well-oiled industry called Naxalism.

Most urbanites, in India, however cannot identify with Naxalites, even though it is one of the greatest threats to law and order within India.

IPS officer Vineet Agarwal says “I have spent more than a 100 nights in the forest of Gadchiroli- urbanites cannot imagine the living conditions there.”

The author has humanised, and  portrayed Naxalites from the point of view of a common tribe. Hence, the book evokes strong emotions, and makes for lucid reading.

So will books like these bring about a revolution in India?

Filmmaker Vishal Bhardwaj said, “In India, the concept of destiny is very strong. If something bad happens, its because of what you did in your past life. People tend to accept their fate. Revolution therefore is a difficult concept.”

The author added, “Not all books are about stirring a revolution. I want people to be aware of Naxalism and make it part of the national debate.”

Anup Jerajani, publisher, The Write Place, a division of Crossword Bookstores was present at the launch added, “this book was published almost 10 years ago, but for private circulation. We have been in talks for over 3 years to republish this book, and give it a mainstream audience. I’m glad it has finally happened.”

On being asked whether this book would be the subject of his next film, Vishal Bharadwaj, who is well known for making adaptations from books, added, ”I am reading the book right now, and its a promising story.”

Mobil Associates with The Most Anticipated Movie of the Year- 83