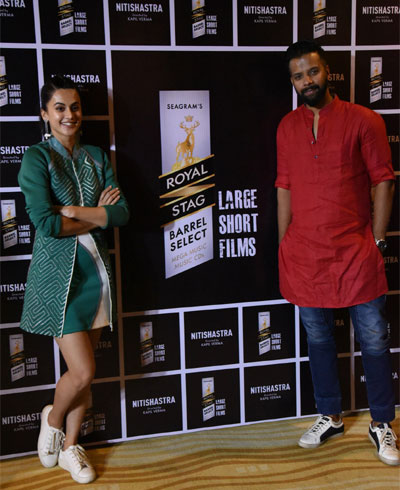 Royal Stag Barrel Select Large Short Films presents Kapil Verma’s short film ‘Nitishastra’. Starring Taapsee Pannu and Vicky Arora, the perfect short showcases the life of a young girl and how her life completely changes because of a grievous crime committed by her brother.
Barrel Select Large Short Films has ushered in a revolution in the field of filmmaking. Through a slew of powerful short films, the platform has successfully redefined movie-watching for cinephiles over the past few years. Not only has it gained immense popularity, Large Short Films has become one of the most credible and celebrated stages for short films in India.
Commenting on the release, Raja Banerji, Assistant Vice President, Marketing, Pernod Ricard India, said “Nitishastra is a very intense and powerful film and we are pleased to release it on our platform Royal Stag Barrel Select Large Short Films. The film features remarkable work by the director as well as the cast who have brought one of the most intriguing stories to life perfectly. We feel proud to associate with incredible directors who create original and meaningful content. It also gives me immense pleasure to see how the short film industry has grown and evolved attracting great audience as well as extremely talented artists. In line with the brand’s philosophy of make it perfect, we have and will continue to encourage and motivate talented film makers to showcase their original creativity through our platform and this film is a true example of originality and creativity”.
‘Nitishastra’ is an intense short film depicting the life of a strong girl who has devoted her life to empowering women by teaching them how to fend for themselves in life threatening situations. Her life takes a drastic turn when her brother commits a grievous crime which has severe repercussions for her family. As the story progresses, the young girl gets caught up in a dilemma where she is trying to decide whether to forgive or punish her brother who she loves the most.
Talking about the film, director Kapil Verma said, “Nitishastra is a compelling narrative and an intense film, so it was challenging for me to showcase the story in 20 minutes. Both Taapsee Pannu and Vicky Arora have played their characters with perfection. I am thrilled to release ‘Nitishastra’ on Barrel Select Large Short Films. I believe that Barrel Select Large Short Films is the perfect platform to celebrate the short films and it has truly been the torch bearer for short films in the country. I would like to thank them for the phenomenal work that they are doing. This platform truly encourages and motivates young filmmakers to exhibit their work perfectly”.
Commenting on the release, Taapsee Pannu said, “I am very excited for the release of ‘Nitishastra’. This film is very special to me and I am really looking forward to the audience’s response. This short is very close to my heart. It is a film with a very consuming plot and I had a great experience being a part of it. Short films have started gaining a lot of popularity in the recent years and Barrel Select Large Short Films has contributed immensely to this rapid evolution. I would like to thank them for showcasing our film on their platform”.