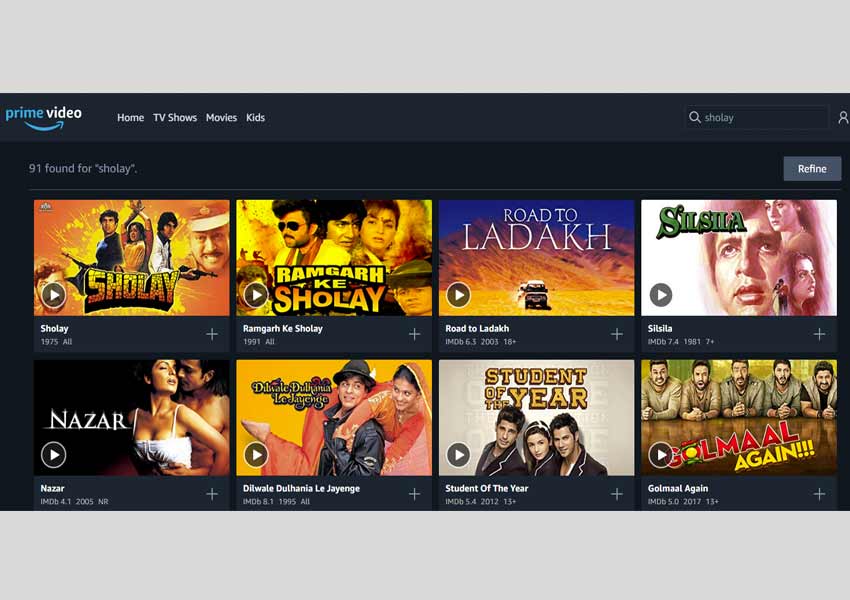 The classic Bollywood blockbuster, Sholay, which recently completed 44 years of release is now available for viewing on Amazon Prime. The movie which is loved by all generations can now be enjoyed anytime across Amazon Platforms, including Amazon Firestick.

Sholay, which released in 1975, was about two criminals, Jai and Veeru (Amitabh Bachchan and Dharmendra), who are hired by a retired police officer (Sanjeev Kumar) to capture the ruthless dacoit Gabbar Singh (Amjad Khan). All its characters includingJai, Veeru, Gabbar Singh, Thakur and Basanti, are now evergreen characters that are quoted often in pop culture and the movie is a sheer masterpiece of Indian cinema.

Sholay was declared the “Film of the Millennium” by BBC India in 1999. It topped the British Film Institute’s “Top 10 Indian Films” of all-time poll of 2002 and was voted the greatest Indian movie in a Sky Digital poll of one million British Indians in 2004.  It was also included in Time Magazine’s “Best of Bollywood” list in 2010 and in CNN-IBN’s list of the “100 greatest Indian films of all time” in 2013.

“For us at NH Studioz – It is a privilege to be able to exhibit the right films to the right audience at the right time using the best platforms. Sholay is one of the most iconic films from our industry and we pride ourselves to have it in our library. We are excited to make it available for cinema lovers worldwide”, saidShreyansHirawat of NH Studioz

Digital distribution for the film wasprovided by Nirvana Digital, one of the largest Rights Management companies from India.Pinakin Thakkar and Manu Kaushish, Co-Founders, of Nirvana Digital, stated, “Ever since we can remember, we have been fans of Sholay. We have always wanted to bring the magic of Sholay to the world, and today, we are proud to enable this global release. We look forward to bringing the more of the best of Indian Film and TV to the world.”