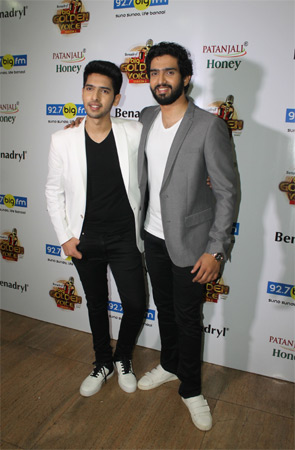 BIG Magic, the light hearted entertainment channel is all set to bring the grand finale of 92.7 BIG FM’s Benadryl BIG Golden Voice Season 4, 92.7 BIG FM’s unique nationwide singing talent-hunt to television viewers. The show, which has been successfully running over the last 4 years on the radio channel, has unearthed some truly unique talents from the nooks and corners of India. The finale of the Benadryl BIG Golden Voice Season 4, hosted by child actor Nihar Gite and Popular TV actor Ankit Bhatla along with co-host RJ Dhanveer will now create waves on national television, and will be telecast on 17th September at 7 pm only on BIG Magic.
Viewers of BIG Magic will get to see the top 5 finalists compete to grab the title of ‘Benadryl BIG Golden Voice’. Judges Armaan and Amaal Malik will join the finalists singing some of their most loved numbers. The finale will also witness a series of special performances by a bevy of noted artists such as Sophie Choudhary, Annu Malik, Roop Kumar Rathod, Sunali Rathod, IIa Arun, Suresh Wadkar among others. The grand show will also present special awards to some of the gems of our music industry.

Commenting on the grand finale, Armaan Malik said, “I feel humbled that 92.7 BIG FM gave me the opportunity to not just judge, but also mentor so many talented singers from different parts of the country. Our country needs to create more such platforms for passionate singers and musicians, who don’t necessarily get to showcase their talent and get the recognition these deserve. I am glad that 92.7 BIG FM is showing the way, and I congratulate them for yet another successful season of Benadryl BIG Golden Voice. I am looking forward to what will be an exciting grand finale.”

On his maiden experience as a reality show judge, Amaal Malik said, “Reflecting on what has been an enchanting journey, I’ve realized that judging a talent hunt of this scale brings out the best in you as a performing artist. While the chance to mentor the participants this year was a humbling experience, to judge such talented voices from every corner of India was a huge challenge. Unfortunately, only one will emerge as a winner, but I genuinely feel that every voice that has reached the finale is a golden voice. I am sure 92.7 BIG FM will stage a befitting finale to what has been a truly memorable season. ”

Catch the grand finale of Benadryl BIG Golden Voice Season 4 on television on September 17 at 7 PM only on BIG Magic.