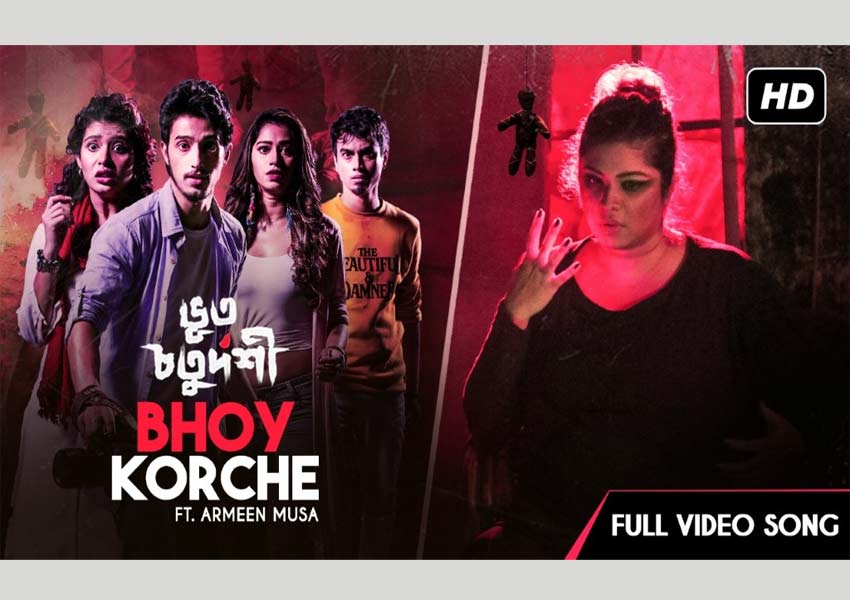 SVF Music collaborated with leading singer performer from Bangladesh, Armeen Musa to present a unique music video featuring the sensation. The original number is sung by Musa herself and composed by renowned music director Indraadip Dasgupta.

Grandly unveiled at the stroke of midnight, keeping the flavour of the song alive, Taneem Rahman Angshu was approached, who for the first time in his successful career in Bangladesh has associated with SVF Music to direct this music video. Angshu brings forth an eccentric video containing an eerie juxtaposition of scenes, shot entirely in Dhaka.

One of the core ideas of the development of Bhoy Korche is that it is releasing on the onset of the much-awaited paranormal psychological thriller ‘Bhoot Chaturdashi’, which is an upcoming film by SVF. Scheduled to release on 17th May, Bhoot Chaturdashi is SVF’s attempt at an experimental genre. It is a fascinating roller coaster ride that combines elements of horror, thrill and a coming-of-age story which follows the journey of four people in their 20s, as they head out to an abandoned house near Bolpur to shoot a documentary. What starts off as a regular fun road trip slowly becomes a dangerously haunting experience as a series of strange and unfortunate events start happening to them. It’s a story about human survival when faced with the supernatural and paranormal. It tells us how death is often right around the corner, waiting to pounce upon us in the dead of the night like a wild, untamed beast. The story of the film is by Mainak Bhaumik and is directed by debutante Shabbir Mallick.

Bhoy Korche showcases a prolific performance by Armeen Musa and the audience can expect to be served with some never seen before cinematic treatment by Rahman Angshu.

The song is also released on audio streaming platforms like: