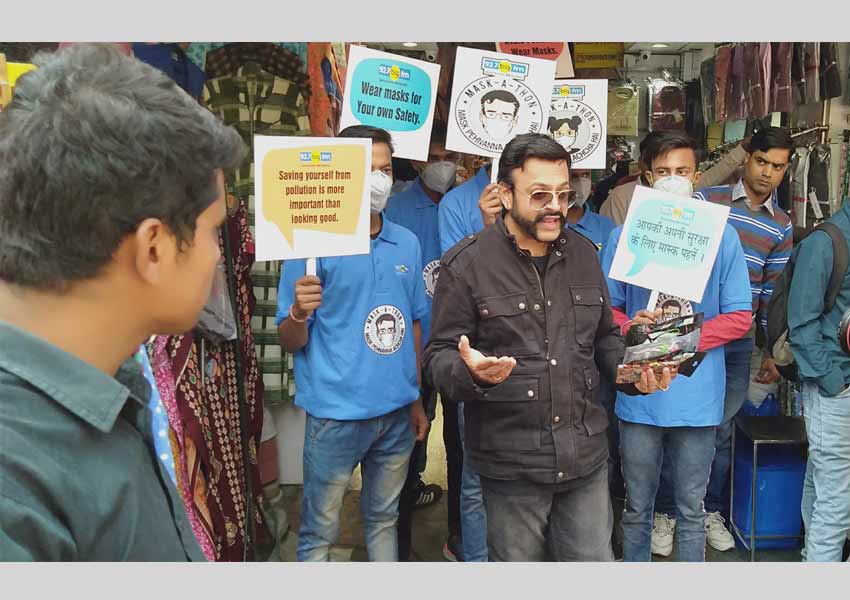 BIG FM launches Mask-a-thon, a unique campaign to encourage Delhites to prioritize health before fashion and wear masks without any inhibition.The campaign aims to motivate people to wear masks while stepping out as the condition of air has been at an alarming state since Diwali and is only getting worse day by day. The objective of the campaign is to promote a healthy habit among masses considering the pollution, while ensuring their health and safety. The campaign has been created based on the insights received by BIG FM team that revealed how some people across the city see masks as being less fashionable and hence avoid wearing it. The tagline ‘Masks PehnnaAchchaHai’ has been creatively picked up considering the safety which these masks offer to people and thus works in their welfare.

BIG MJs from Delhi including MJ Khurafati Nitin, MJ Jassi, MJ Yogi and MJ Simran are not only spreading awareness about the rising levels of pollution but are also seen engaging with people on the streets across Delhi NCR. The MJs are visiting highly polluted areas and key markets of the city such as Anand Vihar, WazirPur, Ashok Vihar, Lodhi Road, Dwarka Sector-8, NSC Gurugram among others with an intent to educate the residents and visitors. The radio station is aggressively promoting the campaign on-air and across social media platforms.

Commenting on the generous initiative, BIG FM Spokesperson said, “. We are concerned about the health of our listeners from Delhi NCR and how it is affecting their day-to-day lives. The city has been declared as one of the most polluted cities in the world. Through this campaign, we aim to challenge the status quo while encouraging our listeners to bring a difference in their lives by wearing masks.”

Speaking about the campaign, BIG MJ Khurafati Nitin said, “I have been a resident of Delhi from many years and I always feel proud and love to boast about the rich culture that this city has to offer. Considering the current scenario, it is disheartening to see the Air Quality Index go so high that it has been declared unsafe. As a responsible citizen of this country, I feel responsible to spread awareness as much as I can especially when it comes to issues like such which is affecting health of people in the worse manner. I am certain that with this campaign we would be able educate more people and guide them in the right direction. And at a time when the conversation and action should get louder to make a difference it is not so.”

BIG MJ Jassi who almost adores every aspect of the city, said, “It saddens us to see what is happening around me in the city. We have always been vocal about issues which ended up affecting so many lives at such a large scale. The urge to come across fashionable can’t be bigger than your well-being. We at Big FM are trying our best to change people’s perception about masks, through this campaign.”

The radio station has always been at the forefront of taking charge and conceptualizing such initiatives for the betterment of the society while touching the lives of its listeners. With such a progressive initiative, the radio station aspires to see Delhites living a safe and healthy lifestyle in the days following the Mask-a-thon.