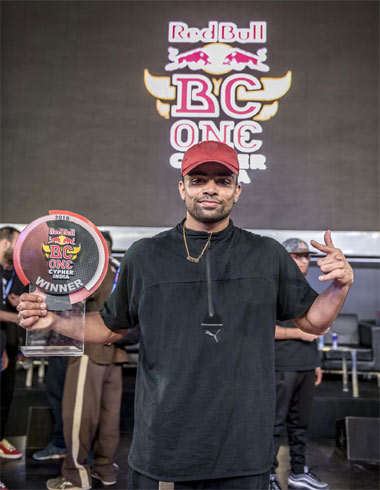 In a showdown of some of the best B-Boying talent in the country, one breaker emerged victorious for the third time in four years of Red Bull BC One in India – B-Boy Flying Machine from Mumbai. Going up against B-Boy Wild Child, Flying Machine put together moves that were deft and original, to beat Wild Child in three incredibly closely contested heats. At the end, it was a unanimous decision by the five judges – Red Bull BC One All Stars Neguin, Ronnie, Lilou, Hong 10 and star Morrocan B-Boy Lil Zoo – in favour of Flying Machine, who will now represent India at the Red Bull BC One World Finals in Zurich in September.

Held in Gurugram for the first time ever, the Red Bull BC One Cypher India 2018 saw fans turn up in huge numbers to support the top 16, who made it through to the final stage after a series of gruelling cyphers across Mumbai, Delhi, Bengaluru, Kolkata, Hyderabad and Jalandhar. While Flying Machine defeated B-Boys Benman, Antique and Xplode on his way to the final battle, Wild Child saw off B-Boys Demon, Kemio and Southkid.

Says B-Boy Flying Machine, “I’m ecstatic about winning the Red Bull BC One Cypher India for the third time. My crew had a lot of expectations from me and since we are from Mumbai, I had to represent Mumbai to the fullest at the championship. This year I will be representing India at the World Finals again and I’m very excited, looking forward to it and will train hard to make it to the top 16 for the Last Chance Cypher. Ever since I started breaking the judges have inspired me a lot; I really look up to them. They mentored me about my preparation for the world championship and it felt amazing. Before Red Bull BC One came to India, few people knew of B-Boys in the country. It’s definitely a huge platform for us to represent India on a global level.”