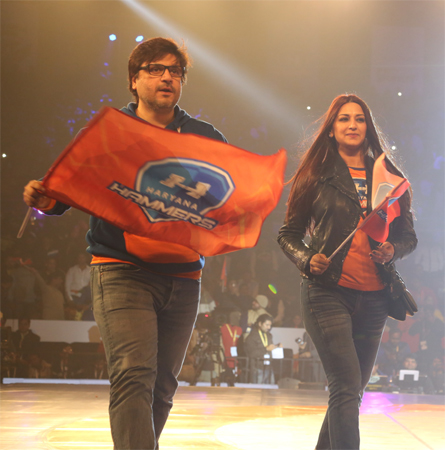 The glamorous world of Bollywood is closely connected with different kinds of sport in India. The Pro-wrestling League has not just provided the Indian wrestlers with a great platform to showcase their talent, it has also got a glamour quotient to the game . The second semi-final match at the Indira Gandhi Stadium, New Delhi saw Haryana Hammers fight against CDR Punjab Royals. Haryana Hammers makes an entry to the finals which will be held tomorrow with Revanta’s Mumbai Garuda.

The attraction of the day was also the presence of legendary actor and team co-owner of CDR Punjab Royals, Dharmendra. The Sholay star was thoroughly immersed in all the happenings and cheered his side on passionately, much to the delight of the crowd.

Also present to cheer the Haryana Hammers team was the charming Bollywood actor Sonali Bendre. She was there to support her husband Goldie Behl’s team- Haryana Hammers. She shared her excitement during the match, “I had a great time watching the semi-final match. My whole family is following the league closely, right from my son to the elders. I truly feel that Pro Wrestling League based on the spirit of ‘Khel Fauladi’ is a great platform for wrestlers to show their prowess.”

The Board of Cricket Control in India (BCCI) Secretary and Member of Parliament, Anurag Thakur also witnessed the semi-final tie between CDR Punjab Royals and Haryana Hammers and lauded the wrestlers taking part in the inaugural Pro Wrestling League (PWL). He said, “Like the Indian Premier League (IPL) changed the cricket scenario in India, I am sure Pro Wrestling League (PWL) will also do it for wrestling in India. The participating wrestlers have shown such competitive spirit, kudos to them. The atmosphere at the stadium can be compared to the India vs Pakistan tie in cricket.” The wrestling area was choc-o-block with spectators during the second semi-final. Almost 5,000 fans witnessed the tie.