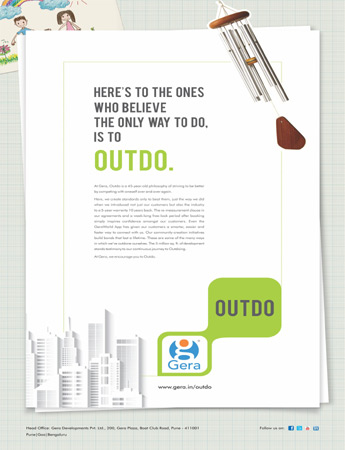 Gera Developments has raised benchmarks in the real estate realm with their constant innovation which are way ahead of time – be it India’s first developer to offer a 5 year warranty (since 2004) or India’s first Child Centric TM project. The brand also invests in customer delight and community creation, which is also their other main differentiator. Their focus has been on creating value for their customers post sales.

As a part of their extensive brand campaign, Gera unveiled its new positioning – ‘Outdo’, to the external stakeholders by way of a brand film. It showcases how the brand has always believed in outdoing itself to achieve greater heights and raise the standards for themselves and the stakeholders.

This story is in the form of a 50 second brand film that draws parallel with some of the famous outdoers of the world. It shows examples of how through the course of history certain individuals believed in not being content with the status-quo. The film illustrates the brand’s philosophy through the ‘OUTDO’ series by showcasing how these individuals have pushed the existing boundaries and by ‘out-doing’ have changed the world for better. The film talks about how Gera’s belief in ‘out-doing’,thereby breaking conventional brick and mortar campaigns usually showcased by real estate companies.The 30 second TV commercial will go on air during this week.

Highlighting the essence of the TV commercial, Mr. Rohit Gera, Managing Director, Gera Developments said, “A year ago, brand Gera embarked upon a journey to bring about a cultural transformation within the organization and also amongst all its stakeholders.This would also reflect the brand’s core purpose and enable the brand to drive itself into newer uncharted territories and we chose the word ‘OUTDO’ as the distillation of our entire brand philosophy.We wanted to communicate to our customers about our OUTDO journey through service, product quality and brand offerings, and this film encapsulates this very well. We worked with the strategic planning team of Paradigm Plus who highlighted the brand’s DNA and the core values which are driving the organization for more than 5 decades in this exceptionally well made and unique film.”

Gera has chosen an unconventional route of narrating this story through this film which also lends itself to a 360 degree campaign panning across TV, multiplexes, social media, print, electronic and outdoor mediums. The story is told in a visually rich treatment that uses various paper craft techniques and merges it with stop-motion filmmaking. The whole film takes place on a drawing table, where most of the world-changing ideas begin. The drawing board is used as a metaphor to the company’s core business of real estate development. The film graphically depicts stories of how the Wright brothers invented the very first flying machine and how Thomas Alva Edison came up with the bright idea of a light bulb, the stop motion takes us through a flipbook journey of the telephone from its first form to the new age smart phone that not only allows you to talk but also see your loved ones from long distance.Just like all of these, Gera has challenged the status quo of the real estate industry with unique offerings like the 5 year warranty on construction since 12 years. The re-measurement clause in their customer agreements and a week-long free-look period after booking simply inspires confidence amongst the customers. Even their mobile CRM app -GeraWorld has given customers a smarter, easier and faster way to connect with the company. Their community-creation initiatives have built bonds that last a lifetime, weaving thousands of content customers into one beautiful family.

With the Outdo campaign, Gera Developments now aims to inspire all its stakeholders to participate in this cultural transformation to achieve greater heights. The campaign engages the customer, showcasing the brand’s philosophy by using the hashtag#DareToOutdo through series of print and social media campaigns on all platforms.

Commenting on the concept of the Outdo campaign, Mr. Rajat Sarkar, Founder, Paradigm Plus said, “Raising standards of business has always been intrinsic to brand Gera. Since Gera embarked upon a journey for their brand, thus the new positioning was derived called – OUTDO. Outdo is a simple word which beautifully and succinctly captures the essence of what the brand has always been about.

The communication campaign led by the TVC faced a challenge to capture this very essence of the brand and inject the target audience with it. The process of Stopmotion, use of Kirigamipaper art, mix of illustrations, craft props, computer graphics has been unconventional and enriching. The production process of this film itself reflects the very thought of OUTDO. It pushed us to go all out.”