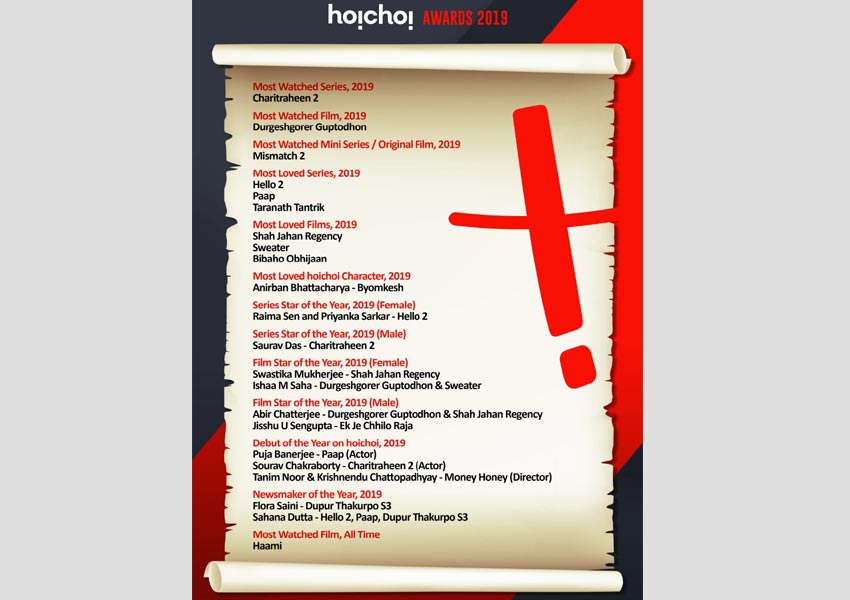 hoichoi has quickly become a household name within 2 years of its launch making it the number 1 platform of choice when one seeks to consume Bengali content. Their popular content is also being dubbed in Hindi which are available on the platform garnering quite the views!

As their subscriber base keeps increasing, their shows and films also keep going up as hoichoi is prompt about creating binge-worthy Originals and acquiring the top films of the year. In 2020, hoichoi plans to produce another 25 Original Series and launch a good number of World Digital Premiers for New Movies on the platform.

Currently, with more than 500 movies and 50 Originals in their boast-worthy repertoire, hoichoi decided to unveil their never-before revealed most watched content along with the most popular ones. These will also include stars and debutantes whose content audience couldn’t keep their eyes off. The esteemed winners received a hoichoi Award to commemorate the celebration.

Time period considered is Jan 2019 – Dec 2019. All Movies and Series which have streamed for at least one month during this time period has been considered. The winners for each category are basis Watch-Time and Views for the mentioned time period.
Tags:
Previous Article
Ultimate Clash between Good & Evil as Baalveer and Aladdin’s worlds collide
Next Article
Paytm Insider & Qyuki digital media host ‘Epic Fam Jam 2020’

TATA Tea Gold Mixture for Maharashtra in a new avatar