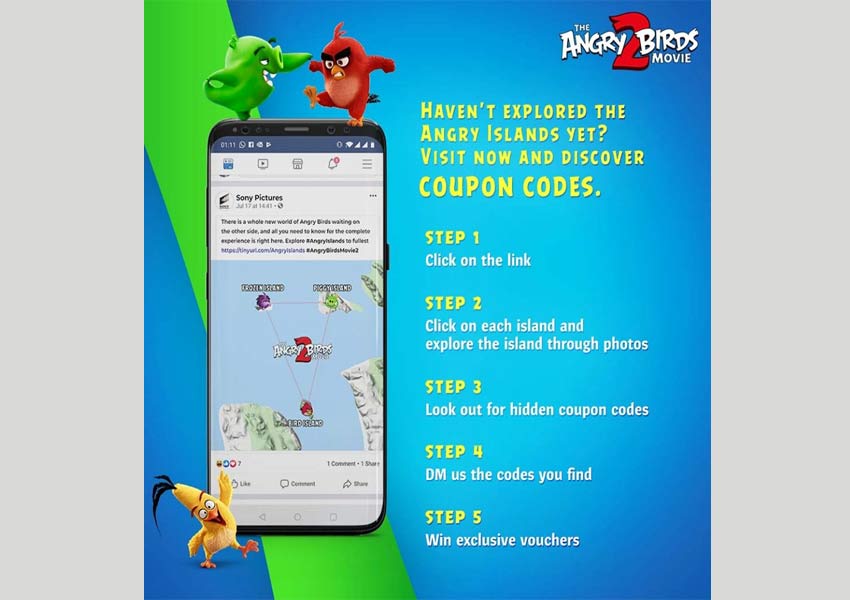 Sony Pictures Entertainment India, has joined hands with Dentsu Webchutney, to turn the virtual islands from the movie ‘Angry Birds 2’ into real ones on the most used location app in the world, Google Maps.

In an effort to label these islands Bird, Piggy and Eagle, the agency found a set of 3 islands adjacent to each other in the same geographic formation as the islands in the movie. With over 500,000 islands estimated to be present in the oceans of the world, it took thorough research to ultimately find the perfect match. By hacking a powerful yet unexplored feature of Google maps of customizing a location by adding pictures and text-based information to a location pin, the team created a one-of-its-kind and first ever experience for the audience. A story was hidden in each of these places about the inhabitants of each island. It revealed itself in the form of highly engaging comic strip as the viewer clicked on the location along with secret coupon codes which changed daily. These codes would lead the audience to free tickets. There was also a Souvenir Store on each island that had its own opening and closing hours, from where the audience could collect free movie merchandize.

So, while people have played the game and watched the movie before, this time they got to live the story just like the characters in the movie.

Here’s how we did it!

Shony Panjikaran, Director & Head of Marketing, Sony Pictures Entertainment India said, “The challenge with Angry Birds 2 was that the game did not have the same recall as when the first instalment of the film had released. We had to find interesting ways of connecting with our target group. And the best way was to reconnect with the original gamers through such unique promotions.”

Pravin Sutar, Executive Creative Director, Dentsu Webchutney said, “In today’s world, we need to find new, different and better ways of engaging the audience with the story to market a movie. The focal point of the movie is Birds and Pigs coming together to fend off attacks from the Eagles who want to take over their island. So, we thought what if we could bring this story alive on digital and create a real experience for our users. After some research we found 3 such identical islands that were unlabeled and we turned them into Angry Birds islands.”