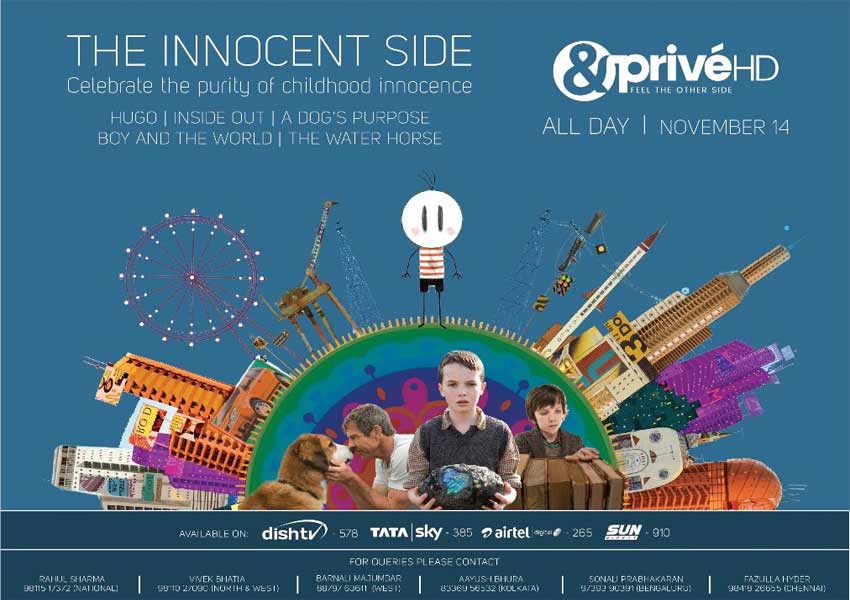 The programming for this special day has been specifically curated to showcase the sweet innocence of childhood. With movies such as Hugo, A Dog’s Purpose, The Water Horse, Boy and the World and Inside Out, it is inevitable to not feel like a child again.

Hugo, the Martin Scorsese masterpiece was nominated for 11 Academy Awards, 8 BAFTAs and 3 Golden Globe awards, earning Scorsese his third Golden Globe Award for Best Director. This film features the life mission of a brave young boy who wants to find a key to his father’s automan and ventures into the world.

You will be lying if you ever denied wanting a puppy that would make you feel safe and be your best friend and companion. But, what is the purpose of a puppy, of a dog? A Dog’s Purpose takes its audience through the life of a canine through four lifetimes with different owners through various time periods as he steadily understands his real purpose.

The best part about being a child again is actually the belief and faith that anything and everything is possible. Water Horse is a story about a mystical creature whose existence is questioned by everyone except the young Angus MacMarrow. When given a chance, would you believe a child?

Directed by Ale Abreu, Boy and the World, is Brazilian animation film that portrays the modern world through the eyes of a child. The different circumstances and the raw conflict between the mind and the soul is so real that it makes you feel the fear and adventures of a boy in his world.

Lastly, one of the most fascinating feature films ever created, Inside Out is story about little Riley who is guided by her five emotions – joy, fear, anger, disgust and sadness when she is uprooted from her MidWest life all the way to San Francisco. The variations of emotions beautifully captured in this movie makes you think of what all goes on in a mind of a young child.

This Children’s Day, let The Innocent Side tug at your hearts’ younger strings to feel the other side on November 14, 2018 from 11 AM to 7 PM.