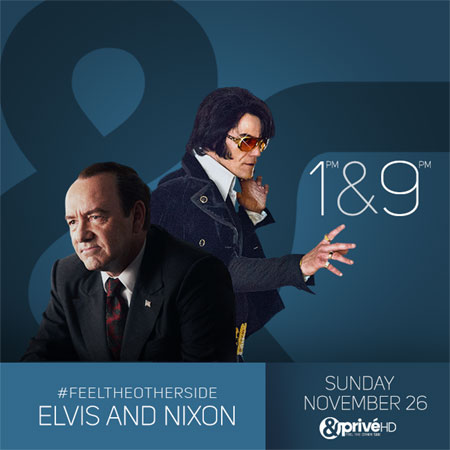 &Privé HD, the newest destination for nuanced cinema, is all set to bring the Indian television premiere of the much-awaited movie, Elvis & Nixon on 26th November at 1:00 pm and 9:00pm.The film is directed by Liza Johnson and stars Michael Shannon as the legendary Elvis Presley and Kevin Spacey as President Richard Nixon.

The drama-comedy is a true story of how the King of Rock and Roll met the President on December 21, 1970 at the White House. The meeting was instigated by Presley’s (Shannon) desire to join the FBI as an undercover agent to put a stop to the rising drug culture in America. While Nixon wasn’t too pleased to meet Presley initially, he later realized that they have much in common – both being self-made men having worked hard for their success.