&PrivéHD premieres ‘Secret in their Eyes’ 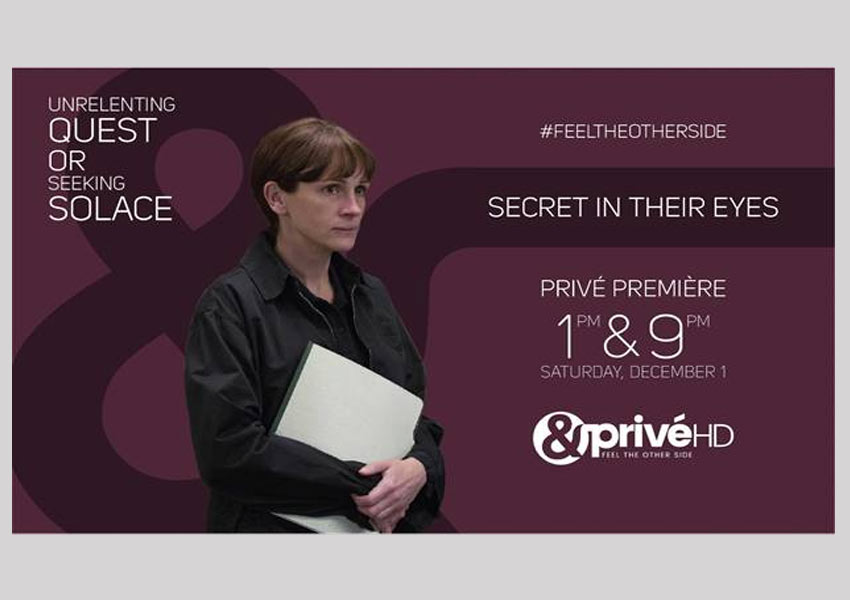 &PrivéHD brings you the story of a distraught parent who takes matter in her own hands  to find her daughter’s murderer in Secret in Their Eyes on Saturday, December 01 at 1 PM and 9 PM. Written and Directed by Billy Ray, the movie is a remake of the 2009 Argentine film of the same name, both based on the novel ‘La pregunta de sus ojos’ by author Eduardo Sacheri. The movie has an exceptional star cast featuring Golden Globe and Oscar Winner Nicole Kidman who plays the character of Claire and Academy Award Winner Julia Roberts (Jess), along with Dean Norris as Bumpy Willis & Chiwetel Ejiofor as Ray Kasten who is the film’s churning energy center.

Two policemen Ray and Jess are allotted “terrorist” duty, monitoring the activities around a local mosque in Los Angeles. Having been informed about the death of a teenage girl in an alley near the area, the pair quickly rushes to the crime scene to only find out that it is actually Jess’ daughter Caroline. The brutal murder of Jess’s daughter leaves the investigators wondering and tears them apart eventually rendering them motivation-less to crack the case. 13 years after the prime suspects walk away, Ray insists on reinvestigating to get to the bottom of the gruesome murder and convinces Jess to reopen the case. An unspeakable secret will be revealed about the destructive effects of personal vengeance on the human soul.

Witness the other side of a grieving mother as Secret In Their Eyes premieres on Saturday, December 1 at 1 PM and 9 PM on &PrivéHD.