Firdaus and Kabir’s journey with &pictures WTP of Notebook 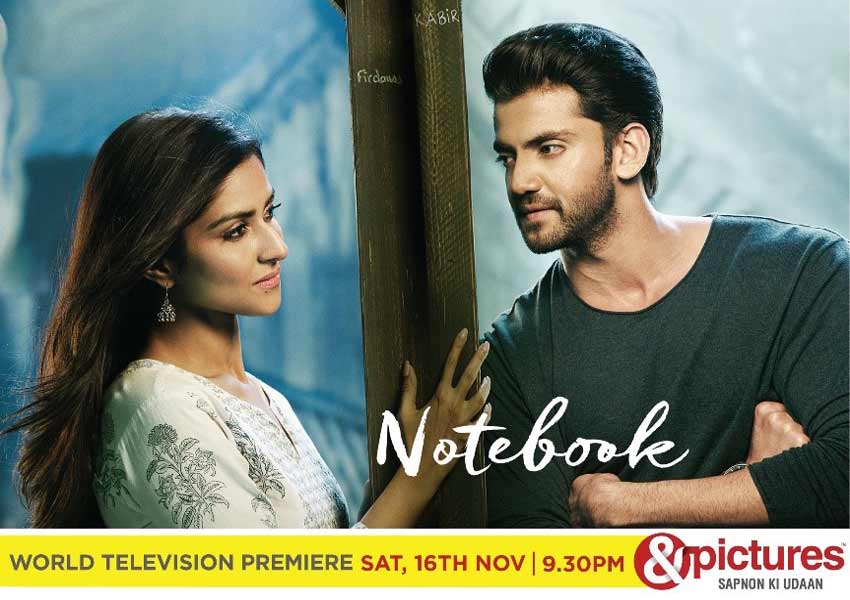 Nitin Kakkar’s romantic drama Notebook reminds you of the time when you didn’t have to swipe right to find love. The movie takes you down the memory lane when love blossomed on the last page of a school notebook and remained a close guarded secret. Introducing debutants Pranutan Bahl and Zaheer Iqbal as Firdaus and Kabir Kaul respectively, the movie is an adaptation of the Thai drama ‘The Teacher’s Diary’. A story that will make you fall in love all over again, Notebook will have its World Television Premiere on Saturday, 16th November at 9:30 pm only on &pictures under the property Saturday Premiere Nights.

Commenting on her debut, Pranutan Bahl says, “Notebook is a one of kind love story where the characters fall in love with people they have not met. While the concept is lesser known in today’s day and age, we got to know of many such real-life stories while shooting for the film. The movie narrates a charming romance where there is longing, and unconditional love and I hope everyone watched the World Television Premiere on &pictures. Notebook will always be a film I hold close to my heart, as the character Firdaus will always be the most special to me.”

Zaheer Iqbal said, “When the script of Notebook was read, I instantly liked the story because it wasn’t a conventional love story as it was unique in every way. Even the character I play, it is of a boy who has gone through a lot which traumatized him in a way. However, his life takes a U-turn when he decides to teach at a school where he stumbles upon Firdaus’ notebook. On Reading the way she perceives the world and expresses her feelings is what encourages him to look at life differently. Viewers who missed this in the theatres can catch this beautiful love story on &pictures on 16th November.”

Set in a small secluded school in one of the largest freshwater lakes in Asia – Wular Lake, Kashmir; the movie narrates the story of two individuals who fall in love with each other through a notebook. The school with an attendance of seven students lacks basic amenities like running water and electricity and is on the verge of shutting down as there are no teachers. Coming in as saviour is Kabir Kaul, an ex-army officer who decides to teach at his late father’s school – Wular Public School. With no professional training he finds it hard to teach and deal with the kids. Just when he is about to give up, he stumbles upon Firdaus’ notebook in the drawer of the desk. With small moments captured, and many thoughts jotted down, Kabir begins to fall in love with Firdaus. Will he ever meet Firdaus and express his love for her or will it remain a one-sided love story?

To find out watch the World Television Premiere of Notebook on Saturday, 16th November at 9:30 pm only on &pictures