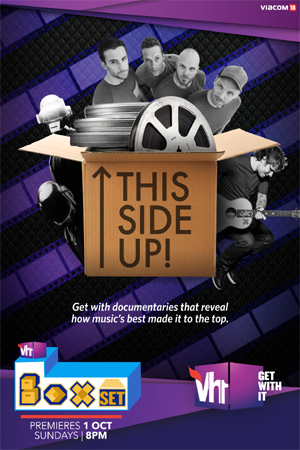 Vh1 is all set to take celebrationsto a higher decibel this festive season with new show premieres and specially curated festive playlists. Vh1 Fireworks: Diwali Special will be playing the best songs to set the mood right on 19th, 20th and 21st October. Leaving no reason to celebrate behind, Vh1 will also celebrate Halloween with some spooky music videos on31st October with Vh1 Trick or Treat. To add to the extravaganza, the channelgears up for the Television Premiere of VIDIOTS and Vh1 Box-Set. While VIDIOTS will uplift traditional music video experience with a pair of comedians commenting on popular music videos, Vh1 Box-Set will feature songs of the most trending artists. With the new shows making their debut, viewer’s favorite X-Factor Season 14 will continue to entertain the audience every Monday and Tuesday, this October.

This Diwali, Vh1 ensures wholesome entertainment each day of this great festival.The channel will air a special segment Vh1 Fireworks from 19th October to 21st October. The Diwali day will be lightened up with Vh1 Fireworks: Light it up! A playlist that celebrates this festival of lights & that’ll make sure there’s never a dull moment in the party! Followed by Vh1 Fireworks:Top 20 Highest paid entertainers on October 20th, playing groovy tunes of musicians who have made it to the list of highest paid entertainers this year. The final day will feature Vh1 Fireworks: Gold Class, a curated playlist featuring artists whose albums have made the cut and achieved gold, platinum & multi-platinum status.

Excited about the special festive line-up for October, Hashim D’Souza, VP & Programming Head – English Entertainment Cluster, Viacom18 shares, “Vh1 has always been at the top of the game when it comes to bringing the best international entertainment to India. Bringing an array of shows on all the special days this October, Vh1 wishes all its viewers a very prosperous Diwali and happy Halloween, full of music and entertainment. We are also thrilled about the two new show premieres this month in addition to the current blockbuster shows”

Vh1 is revved up to premiere VIDIOTS Season1 for the first time on Indian Television;a newseriesthat will elevatethetraditionalmusicvideoexperience. VIDIOTS, which premieres on October 9, will feature pairs of comedians watching and commenting on some of today’s hottest music videos. To amplify the experience, October also premiers Vh1 BOX-SET, a box set curated with songs from not just one but all the trending, popular artists.

In addition to all the special line-ups and exhilarating show premieres, Vh1 will also continue to air the popular choice X-Factor Season 14 every Monday and Tuesday. With Simon Cowell, Nicole Scherzinger, Sharon Osbourne and Louis Walsh looking for the next big thing, the show is a treat for all the music lovers.

With a diverse line up of shows, the channel continues to offer an experience to its viewers that affirms its position as India’s go-to destination for all things music, entertainment, and pop-culture.