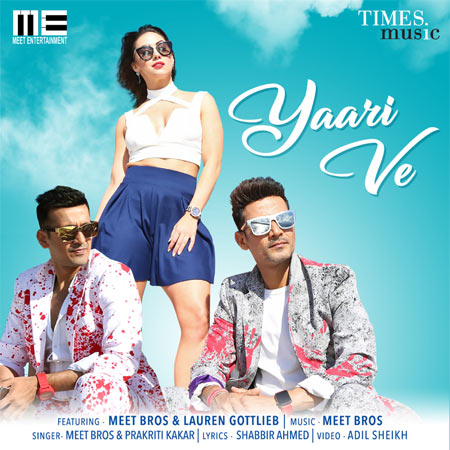 Manmeet Singh and Harmeet Singh, popularly known as Meet Bros, are all set to unravel  their new party anthem of the year – ‘Yaari Ve’ , on December 20, 2017. The song has been composed by Meet Bros and sung by the duo along with Prakriti Kakar. Shot in the picturesque island of Crete in Greece, the music video will feature the musical duo alongside the gorgeous American / Bollywood actor-dancer Lauren Gotllieb. The music video will be  exclusively available on Times Music YouTube channel.

‘Yaari Ve’ is a song that celebrates friendship and life, inspiring listeners to lighten up, fly high, enjoy and live life to the fullest! Meet Bros and the sensational Lauren Gottlieb display an unmatched chemistry and steal the show. Directed by Adil Sheikh, the catchy tunes of the song are sure to make everyone groove to its laid back beats and groovy rhythm.

“Having composed so many hit songs, this time we decided to create something that depicts the beauty of friendship, love and life. This song is one of our most beautiful compositions and we believe that it will be loved by all”, said the composer-singer duo.

“I have done many music videos and this has been one of my best experiences ever. ‘Yaari Ve’ is a beautiful song and I loved it the first time I heard it. It has a great vibe and I loved dancing to it. I hope the fans love the song and the video as well”, said Lauren Gotllieb.

Mandar Thakur, COO of Times Music said, “Yaari Ve is an amazing song by Meet Bros, the song just sticks in your head and they are one of the most talented hit makers of this decade”.

Some of Meet Bros’ most popular chartbusters include ‘Baby Doll’ from Ragini MMS 2 and ‘Chittiyaan Kalaiyaan’ from the movie ‘Roy’. They were applauded by several prestigious awards including ‘The Filmfare Award, ‘The IIFA Award and ‘The Screen Award’ for The Best Music Director.