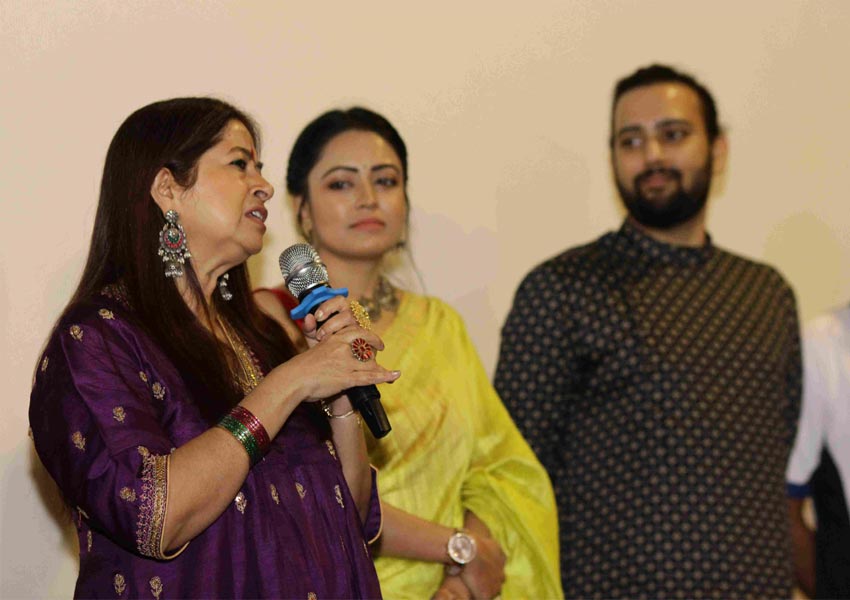 When was the last time Indian Cinema witnessed an Anti -War movie? When did we get to see the mental –health of a soldier being portrayed? Touted as India’s first Anti-War movie, director Jugal Raja’s Bunker depicts Lieutenant Vikram Singh as lone survivor with a fatal injury in a secret Bunker at the LOC in Poonch, Kashmir, which has been hit by a mortar shell during a ceasefire violation.  The film inspired by the soldiers, who serve on the borders to safeguard the country, the film has been widely applauded at numerous film festivals. Presented by Wagging Tail Entertainment and Produced by Falcon Pictures Production, the team of Bunker today launched “Laut ke Ghar Jaana Hai”, a heartfelt rendition by National Award Winning singer Rekha Bhardwaj. The film brings up important issues like Mental Health, Inter-Personal Relationships between Army families and how a soldier and his family pays the ultimate price for cross border tensions.

Speaking at the launch of 2020’s most heart-wrenching peace anthem dedicated to the Indian Army and their families, National Award winning singer Rekha Bhardwaj shares, “I couldn’t have chosen a better song than Laut ke Ghar Jaana Hai, as it’s for the first time that I have sung a rendition which portrays a nationalist fervour. The song has a beautiful melody to it with lyrics penned by Shakeel Azmi and music by Kaushal Mahavir so everything just fell in place for the song”. While speaking about the movie she opined, “Bunker has some brilliant minds pooling in together to make this film. The movie doesn’t fuel hatred and propagates peace. It depicts the war in the soldiers mind about what he goes through, about his loneliness and psyche of a soldier at the border”. The song is out on T-Series and will be available on all music platforms.

Informs Writer-Director Jugal Raja, “No one wins a war. Whether the soldier is from our side or the other side, its the soldier’s family which is always at loss.  The movie and the song throws light on this agony of military life. We are extremely blessed that we could have Rekha mam for the rendition which is an integral part of the movie; I also feel that Rekha mam is not just a singer but also an important character in the film”. 95 percent of movie was shot in 12 by 8 feet Bunker. The bunker is used as a metaphor for a soldier’s mind which is always at conflict between duty towards the country and duty towards the family. “Having travelled across Leh to the North East Tawang, meeting the soldiers and talking to them, I realised that their families were fighting their battles in their own way, and are nothing less than soilders themselves.”

Abhijeet Singh, who plays the titular role of Lieutenant Vikram Singh added, “Bunker is a film that’s a biopic of every soldier whose name you may not heard in life. It is a story of all of them culminated in one. The 2 months I spent with my prepping for the most-promising script I have come across was different, unheard and a great learning process. I was told not see any army based films. Vikram Singh is a common man having a tough job. He is not a super hero but the that of a man who stands behind a superhero. This was a story of any supporting character that you might have seen in any army based films made till now. The human factor was real and organic.” He further adds, “Most of the time we spent we sat in a closed area without any ventilation, which made me claustrophobic. It was only on the day of shoot that the reality struck me as my eyes were not just closed but I had prosthetics on for almost 14 to sometimes 18 hours a day”

Written and directed by Jugal Raja and presented by Wagging Tail Entertainment, starring Abhijeet Singh and Arindita Kalita in the lead roles. Bunker will be releasing on 17th Jan 2020.