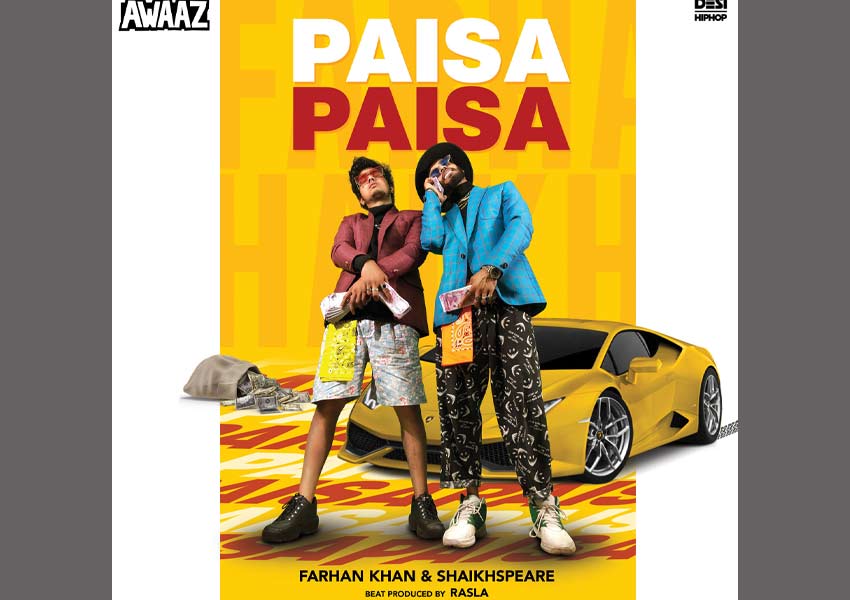 Shaikhspeare is the co-founder of Mumbai’s veteran Hip-Hop Collective, Bombay Lokal, which features multiple aspects of Hip Hop in 1 crew – including break dancers and graffiti artists. The crew operates out of Nalasopara, Mumbai and has been instrumental in spreading knowledge about Hip-Hop in Mumbai.

As one of the veterans of the Hip Hop movement in India, Shaikhspeare took Farhan Khan under his wing for this single, and they both worked closely together with Rasla, the track’s producer.

The single is a conscious hip hop song with trap vibes written all over; where Shaikhspeare, Rasla, & Farhan Khan uses their art to show the ugly side of politics and greed. When asked about the single, Shaikhspeare went on to say, “We wanted to reflect how money was controlling things around us and make the message reach to the masses in an entertaining way”

Rasla played an integral role in the creation of the single, ‘Paisa Paisa’. As a producer, he has worked with multiple artists, and also features as a DJ with his own productions. The Gujarati producer took his time to craft his sound to stand out within the Hip Hop community. “The Hip Hop spirit is lit everywhere in India.”, said Rasla, “It’s wonderful how Hip Hop has grown so much, and there’s much more to come.”

Farhan Khan, who kicks off the song in the first verse, grew up in Mira Road and has been on the grind in the Mumbai Hip Hop scene for the past three years. When asked about his thoughts on the current state of Hip Hop in India, Farhan Khan said, “It’s great that the Indian Hip Hop scene is growing steadily; and the mass audience is slowly catching up to the Hip Hop energy.” He added, “And once they all catch up, it will be the true golden era of Indian Hip Hop.”  With multiple singles planned throughout the year, Farhan Khan has ultimate respect for the grind required to make it in the industry.

AWAAZ has been instrumental in impacting the Desi Hip Hop scene in India throughout 2019, releasing ten back to back singles in the summer. The joint venture between Desi Hip Hop Inc and Sony Music India is on a mission to find, nurture, and celebrate Hip Hop artists from all over India and the South Asian diaspora abroad.

With a weekly playlist by AWAAZ on multiple platforms including Spotify, Saavn, Wynk, Hungama, and Amazon Music, listeners can discover the new wave of Desi Hip Hop music burgeoning out of India. This week, the AWAAZ playlist features ‘Paisa Paisa’ along with multiple other hits from within the Indian Hip Hop community.