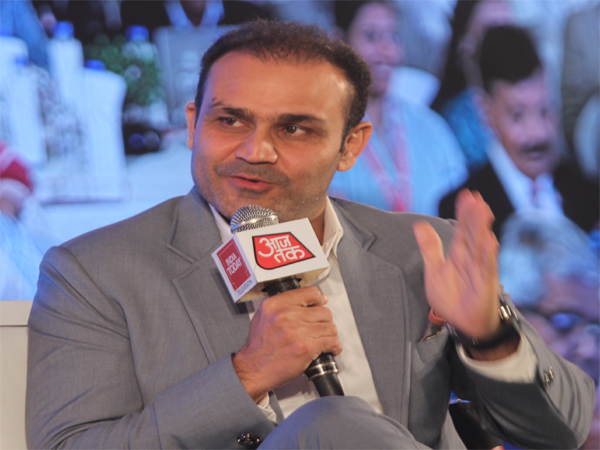 Former India cricketer Virender Sehwag while speaking at ‘Aaj Tak Salaam Cricket’ conclave on Monday said India has very good chances of winning the ICC T20 World Cup being held in India from Tuesday. The explosive batsman revealed that he always wanted to score 400 in test match, for which he had even registered ‘Sehwag400’ email ID, but could not achieve it. He also said all news about rift between him and Indian captain Mahendra Singh Dhoni was media creation.

“India has 99 per cent chances of winning the T20 World Cup…I say this because India today has one of world’s best batting and bowling line ups. Indian team is fit to take any challenge,” he said. Mr. Sehwag predicted that India could play either South Africa or West Indies in the finals. He noted that India has tasted success in recent tournaments and tours to other nations and is experienced to perform well in the tournament. India will also get the advantage of playing in domestic conditions. He also said Mr. Dhoni has company of senior and experienced players like Yuvraj Singh, Harbhajan Singh and Ashish Nehra this time and he can use their advice to come out of any crunch situation as the Indian captain did in the last T20 World Cup final match against Pakistan.

Talking about his early days when he started playing cricket, Mr. Sehwag said ‘gully cricket’ helped him emerge as a dashing cricketer and it was same with other players like Dhoni. “In India everyone cricketer comes to main stage after playing in their neighbourhood gullies and it helps in grooming them. Rejecting any chances of his returning to any form of cricket as he has already taken retirement, Sehwag said Ashish Nehra has managed to make a comeback because he worked hard on his fitness and he now is playing despite being in his late thirties. He complimented opening pair of Rohit Sharma and Shikhar Dhawan and said it was best opening pair India could as the left-hand and right-hand batsmen combination gives an edge to India.”

Remembering his 300 run score against Pakistan as one of his best knocks, Sehwag said he always wanted to score 400 runs in test match and he had even registered ‘Shewag400’ email to commemorate it, but it could not happen. He said he always enjoyed in his explosive batting format and never cared for anyone.

On Dhoni, Sehwag said all stories of rift between him and Dhoni was media created and that there was no groupism in the Indian team when he was a part of it. He said Dhoni still has a lot of cricket left in him and he should continue to play 2019 World Cup. “Dhoni has already retired from test cricket and he is fit enough to continue playing in One-day and T20 matches,” he added.

Sehwag also said he was ready to work for BCCI provided he is given a chance. BCCI has been taking benefit of experience of former cricketers and he too was ready to share his experiences for the benefit and growth of India cricket.