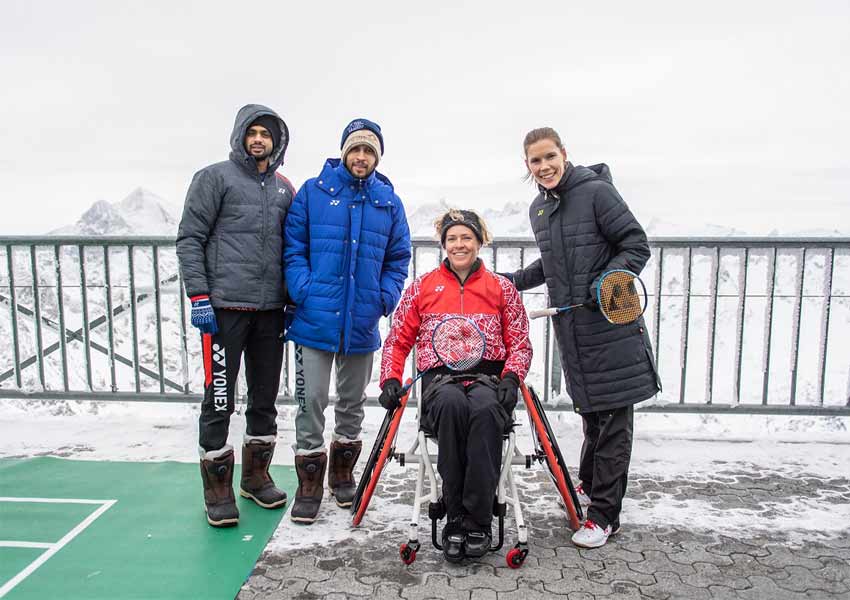 The Yonex Swiss Open (12-17 March) kicked off in full swing, almost half a year before the Total BWF Badminton World Championships that is scheduled in August at St. Jakobshalle in Basel.

“I am excited and thrilled to be playing badminton on Mt. Titlis, that too 10,000 ft above sea level. It was a unique experience and a lot of fun to be able to play badminton in one of the most spectacular Bollywood venues. The view is breathtaking, and I am missing Saina. She would have loved being here”, said Parupalli Kashyap who got married to fellow shuttler Saina Nehwal last December.

Playing against him, Sai Praneeth said – “I am really excited to be here in Basel and I am looking forward to the World Championships this year. This is my first visit to Mt. Titlis and it has been such a great experience.”

“We are very pleased that this event has met with such great interest and that badminton and these two upcoming major events have been given the stage they deserve,” sums up Robbert de Kock, President of Swiss Badminton.

Parupalli Kashyap and Sai Praneeth are currently in Switzerland for the Yonex Swiss Open 2019 and will also be present at the 25th edition of the Total BWF Badminton World Championships from August 19th – 25th where they will play for the Men’s Singles category.  500 athletes from over 50 nations will meet on the courts of St. Jakobshalle to participate in the tournament that will feature men’s singles, women’s singles, men’s doubles, women’s doubles and mixed doubles matches. Badminton fans can look forward to an international sports event in front of around 30,000-40,000 spectators that will be broadcast on television worldwide.