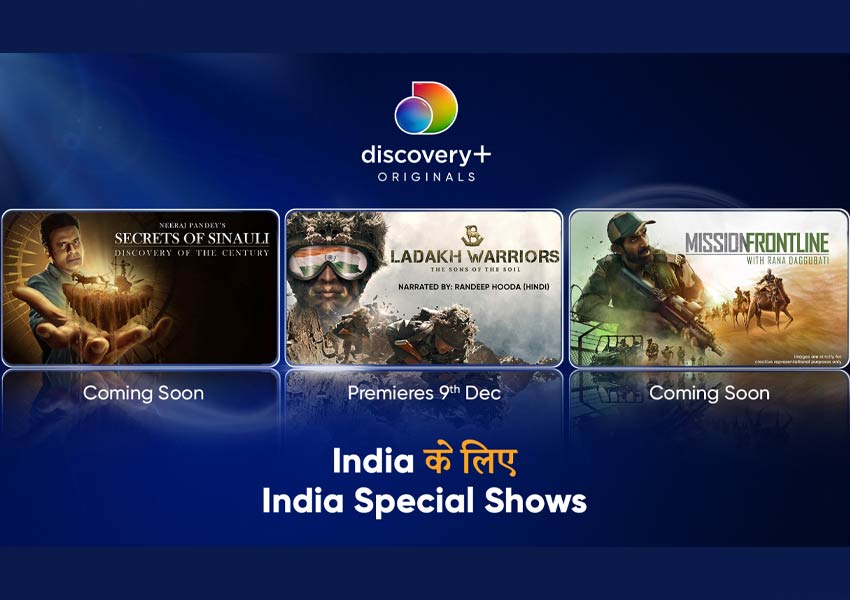 Within the first half of 2021, the channel will have new over 200 new shows and content. Some of the new shows that the OTT platform will offer, are The Indian Dream Hotel, Amma & Appa, Aerial India and The Ganges with Sue Perkins along with new shows like The End of The Storm, A Perfect Planet featuring Sir David Attenborough, The Impossible Row, latest seasons of Gold Rush and Top Gear and many more.

Speaking about the launch of the  India ke liye India special shows, Megha Tata, Managing Director – South Asia, Discovery said, “We’re only a few months old but discovery+ has exceeded our expectations of user adoption. The traction that the product has seen demonstrates the immense appetite Indian consumers have for real-life entertainment and learning space. With discovery+, we are seizing a global opportunity with a single aggregated product. No other media company is better positioned to do this.”

Adding to this Issac John, Direct-to-Consumer Head – APAC, Discovery said, “As promised, we are launching our Indian Originals specially produced for heartland audiences who love and trust discovery+ to offer them real-life entertainment and learning. These shows reflect the particular needs of our consumers – who seek to be both entertained and informed. They will provide our viewers unprecedented access to real-life stories that have never been told before. We’re delighted to launch discovery+ Originals with such a varied and differentiated slate of shows.”

Randeep Hooda, narrating Ladakh Warriors: The Sons of the Soil in Hindi said, “I am a fan of all the border men and their relentless efforts towards keeping our country safe. With Ladakh Warriors: The Sons of the Soil, discovery+ celebrates the snow warriors of India and I couldn’t be happier to be associated with a project like this. To be able to lend my voice to take the story of these heroes to the masses is an honor.”

Talking about Mission Frontline, Rana Daggubati said, “It gives me immense pleasure to have an opportunity to live a day in the life of BSF Jawans. Having played a role of a soldier before, I can say that real life of a solider is very different from reel life. They are our real heroes and what they do for this country is unimaginable. I thank discovery+ for bringing such a project that will give the people of this country a chance to get a glimpse into the lives of BSF and motivate the youth to serve the country.”

Neeraj Pandey, The Presenter of Secrets of Sinauli: Discovery of the Century said, “The fact is that we were such an ancient yet advanced civilization and every new exploration is unearthing even more stunning facts, the immense significance of which is not lost on us. Discovery of this ancient and parallel civilization at Sinauli is not just a fascinating story screaming to be told but has also led to more questions than answers, and this story is far from conclusion. Friday storytellers is excited to be partnering with Discovery Network and bringing this narrative to our audiences.”

Watch ‘Ladakh Warriors: The Sons of the Soil’ on 9th December 2020; while ‘Secrets of Sinauli: Discovery of the Century’ and ‘Mission Frontline’ coming soon only on discovery+.