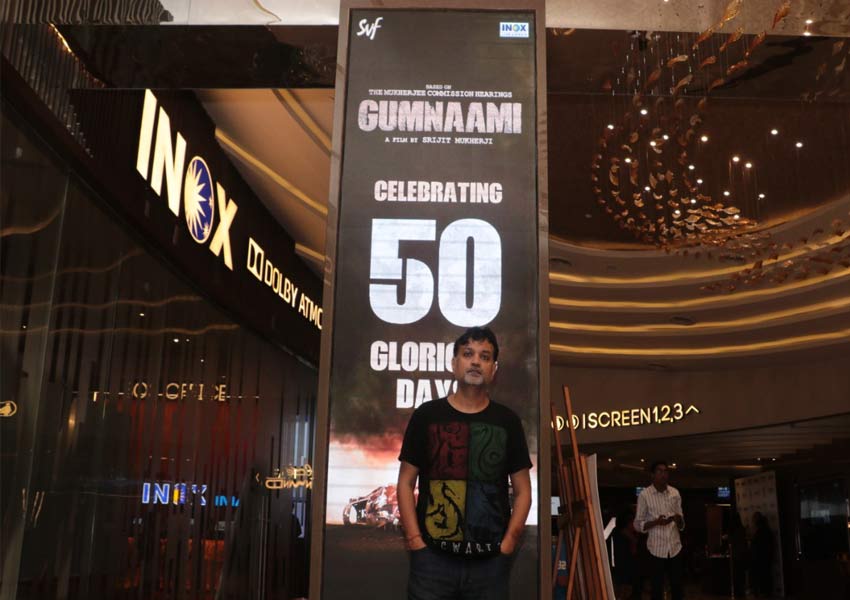 The Blockbuster of Pujo 2019, Gumnaami completed 50 Triumphant Days today at the box office. The subject of the film has been a talking point for the entire country and has generated multiple debates and discussions across the nation. The Bengali version of Gumnaami is one of the top grossing Bengali films during the Festival period in October and all versions of the film have garnered plethora of acclaim from various populations of the audience.

The lead cast and crew of the film came together to celebrate this milestone with a cake cutting ceremony and spoke about the entire arduous journey of the film finally leading to the road of success.

Speaking about this achievement, director Srijit Mukherji said: “Gumnaami is a film very close to my heart because the subject of the film, Netaji Subhas Chandra Bose, is someone I worship as a Hero since my childhood. After many trials and tribulations, we could successfully bring the film to our audience and their sheer acceptance has helped us achieve this milestone!”

Talking about this success, Co-founder & Director SVF, Mahendra Soni said: “The support of our audience towards Gumnaami with open arms has been the reason why this film has reached such a milestone. I thank the audience for their love and support to the film. I congratulate Srijit and the entire team for the determination they have shown”

Gumnaami produced by SVF and starring Prosenjit Chatterjee, Anirban Bhattacharya, Tnusree Chakraborty and others. The music used in the film is the original soundtrack by INA & D.L.Roy and has been rearranged by National Award Winning music director Indraadip Dasgupta.

The film completes 50 Triumphant Days at the Box Office today.