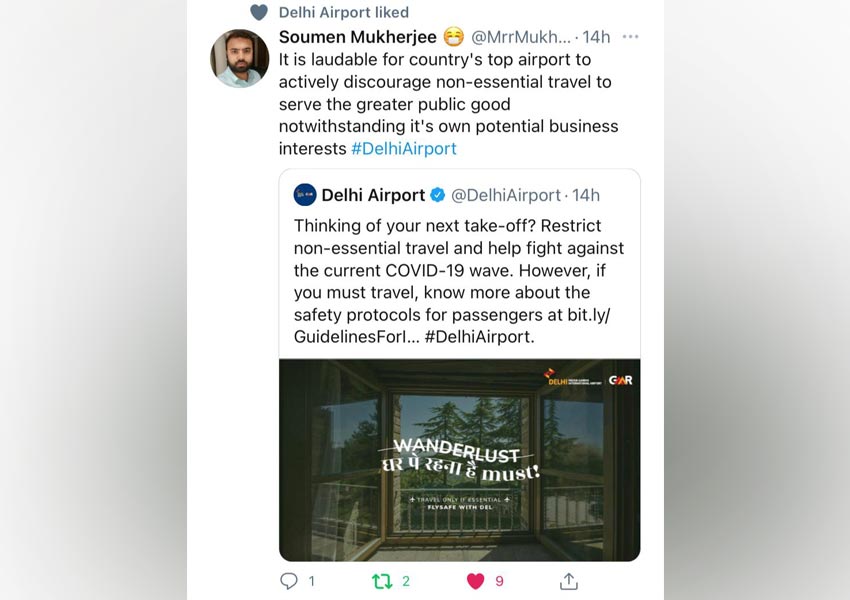 Delhi International Airport Limited (DIAL) has launched a social media campaign in an effort to encourage people to avoid non-essential travel with a series of #TravelTomorrow quotes that drive home the message with a twist. 22feet Tribal Worldwide which is a part of the DDB Mudra Group has conceptualized the campaign.

People have been advised to stay indoors to curb the spread of COVID – 19 as the country is grappling with the second wave of the pandemic. In a crisis of this nature, non-essential travel is best to be avoided. Although, constant reminders of beautiful locations, serene beaches on social media can potentially trigger housebound travellers to put their pending travel plans in action. For the safety of the people and the country, this insight was an enabler for DIAL to go against the grain of its personality and launch a campaign that put the national interest first.

Motivational travel quotes can be regularly seen on social media, and they are often shared with a beautiful backdrop that immediately makes one want to be part of that exotic locale. The idea was to play around with people’s expectations of such inspiring travel quotes. The campaign was brought to life by putting a unique spin on often used terms such as ‘Carpe Diem’ and ‘Wanderlust’ with visuals that are looking out from a window, showing beautiful locations but from the safety of one’s home. Talking about the campaign, Debashish Ghosh, National Creative Director, 22feet Tribal Worldwide said, “Social media captures an individual’s imagination, especially when they are cooped up in their home with a limited set of activities. In the current scenario, staying home is the best way to protect ourselves and leisure travel must be avoided. While DIAL is at the forefront of receiving and facilitating aid flights as well as Vande Bharat flights from across the globe; the travel facilitator also took on the responsibility to dissuade people from non-essential travel. The team deployed a counter-intuitive take on popular travel verbiage to inject the message with a dose of levity. And that’s how this campaign came to fruition.”