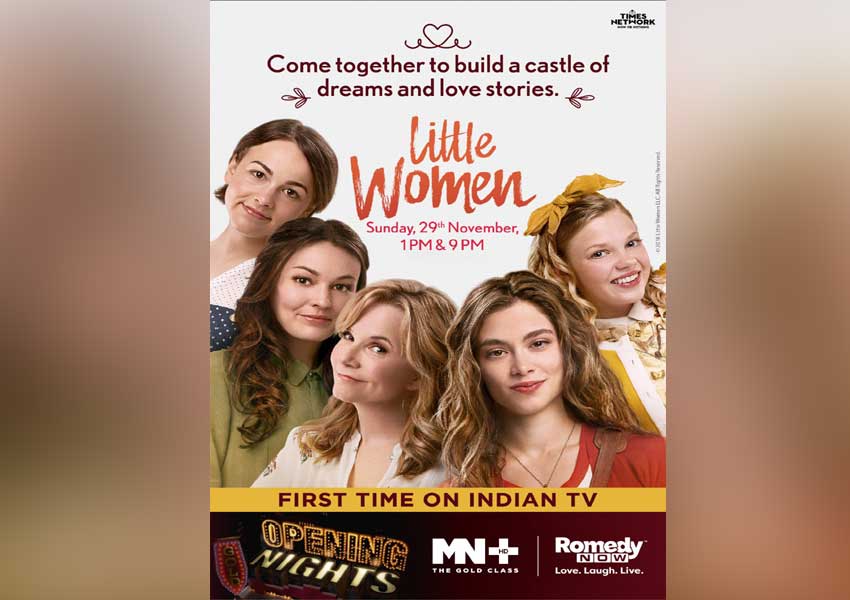 Little Women is coming to your television set this weekend as Comedy Now takes you on a ride through the iconic novel.

Offering the best of Hollywood movies to its viewers, MN+ and Romedy NOW are all set to simulcast the Indian Television premiere of ‘Little Women’, on November 29, at 1:00 PM and 9:00 PM.

The film is an adaptation of Louisa May Alcott’s 1868-69 iconic two-volume novel of the same name. The blockbuster film ‘Little Women’ is a modern retelling of the original story which comes at a time when the legendary novel is celebrating the 150th anniversary of the release of the book.

A Contemporary Take of An Old Classic

In the contemporary narration of sisterhood, Little Women follows the lives of four sisters – Meg, Jo, Beth, and Amy March, detailing their passage from childhood to womanhood. Just like classic fiction, the movie too is depicted from the viewpoint of Jo played by Sarah Davenport. The aspiring writer Jo lives in New York while her sisters live in Massachusetts.

The film is a gripping tale of hope and optimism in harsh times as the sisters struggle through life to mature into women of substance building their own ambitions and relationships. Amidst the growing up and the tragedy, the bond of sisterhood remains intact.

Throughout the movie, we witness a celebration of womanhood as the spunk, bravery, and love of the March sisters are celebrated through thick and thin. Like the classic fiction, the contemporary tale also chronicles the hardships and struggles of women in the present time.

Tune into MN+ Romedy NOW on November 29 at 1:00 PM and 9:00 PM for the Indian Television premiere of the modern classic Little Women, which depicts the iconic tale in the modern daylight.